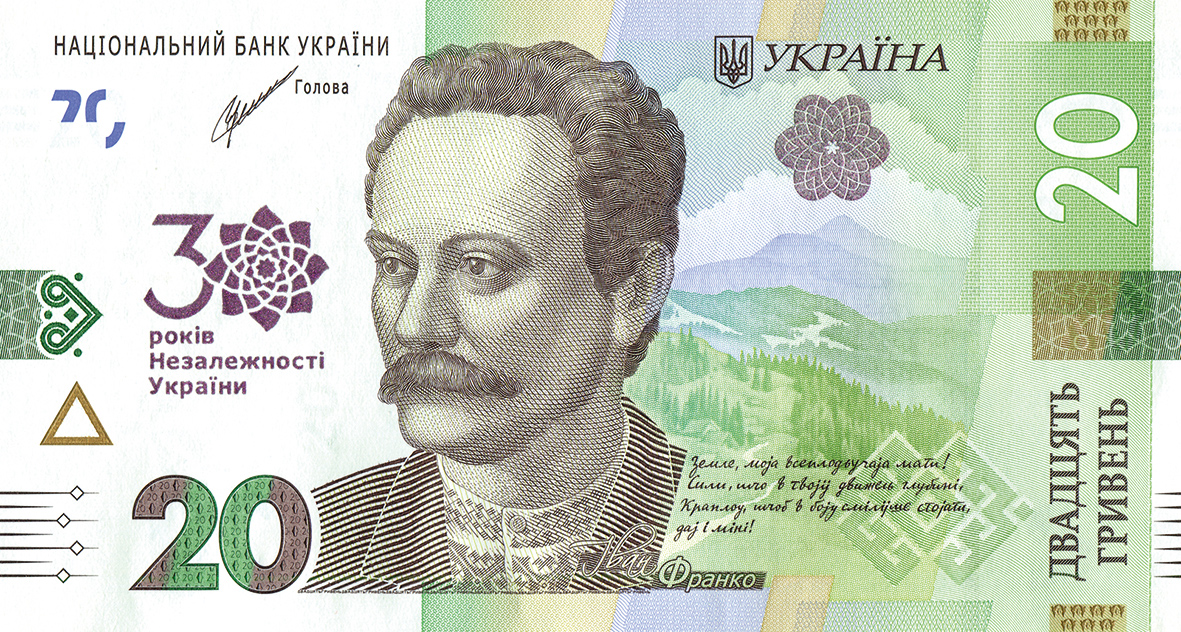 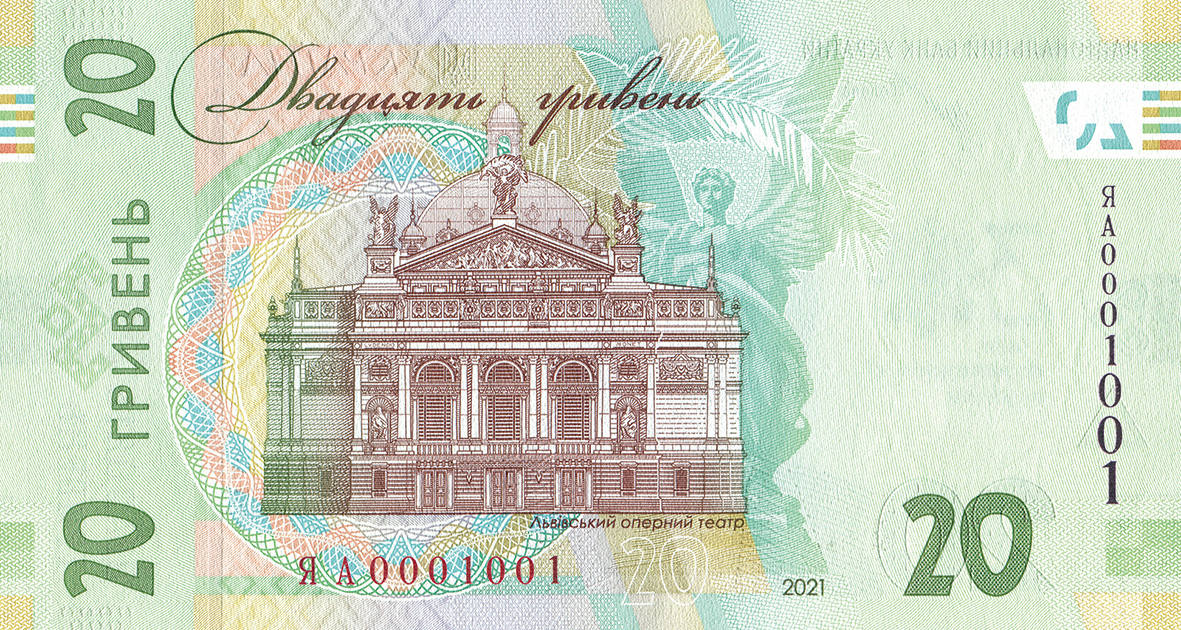 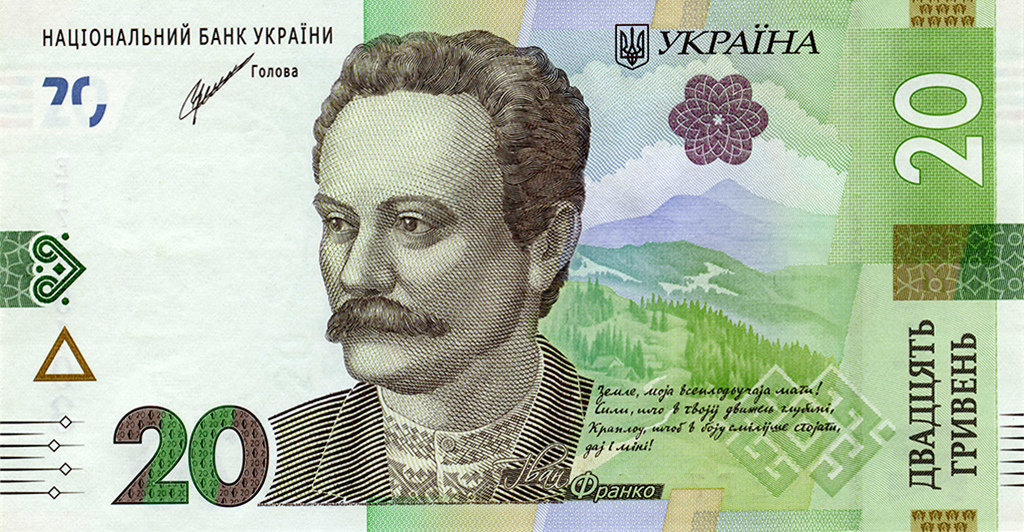 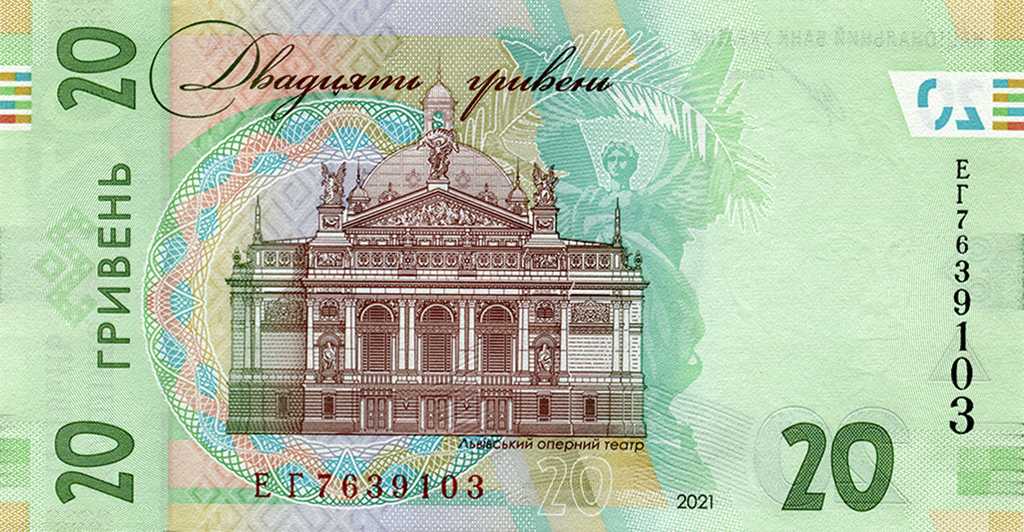 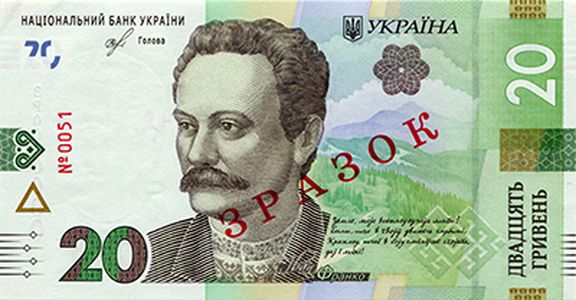 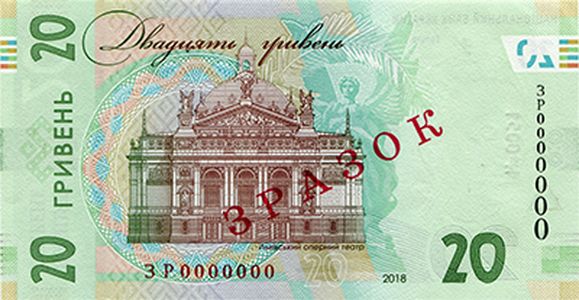 On the front of the banknote there is a portrait of Ivan Franko.

Ivan Franko (1856 – 1916) was a prominent Ukrainian writer, critic, translator, opinion journalist, sociologist, ethnographer, historian and philosopher whose activities were guided by the idea of promoting the interests of Ukrainians and universal human values. A unique phenomenon, his works represent an entire spiritual epoch in Ukrainian history and a significant contribution to world literature.

On the back of the banknote there is an image of Lviv Opera House.

Lviv Opera House was built in 1900 to a design by the architect Zygmunt Gorgolewski.

2.    The optically variable element is a stylized image of a flower to the right of the portrait of Ivan Franko. When the banknote is tilted, the color of the flower changes from purple to olive green.

3.    The security thread is an embedded polymer strip with the images of "20 ГРН", the trident and the denomination figures "20" in two lines, which are visible (normal and reverse images) through a magnifying glass.

4.    The relief images are graphic images on the front of the banknote which, as a result of raised printing, feel rough to the touch. They are:a sign for the partially sighted, a fragment of the portrait, inscriptions, and images.

6.    The see-through element is a composite image of the denomination numerals that forms the full image when the banknote is held up to the light.

7.    Orloff printing is a special printing technique that provides for an abrupt transition of one color into another without breaks in, and displacements of, the image elements.

8.    Rainbow printing is a special printing technique that allows there to be a gradual transition from one color to another without breaks in, and displacements of, the image elements.

9.    The microtext consists of repeated inscriptions that can only be read with a magnifying glass.

10.  The serial numbers are printed in letterpress printing: horizontally in red ink, and vertically (with a change in the height of the figures) in black ink.

11.  The copy-evident pattern consists of thin lines of different geometric shapes that form a moiré pattern when copied or scanned. 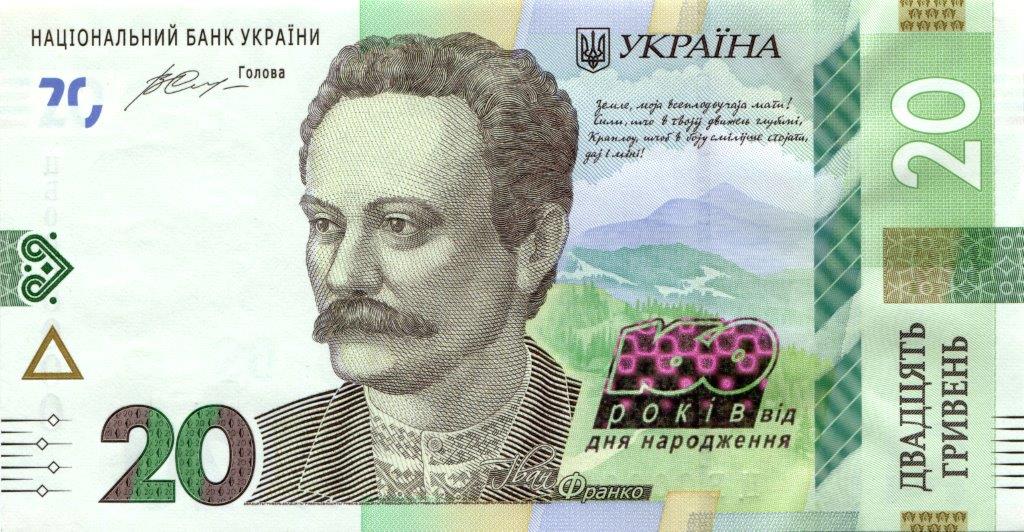 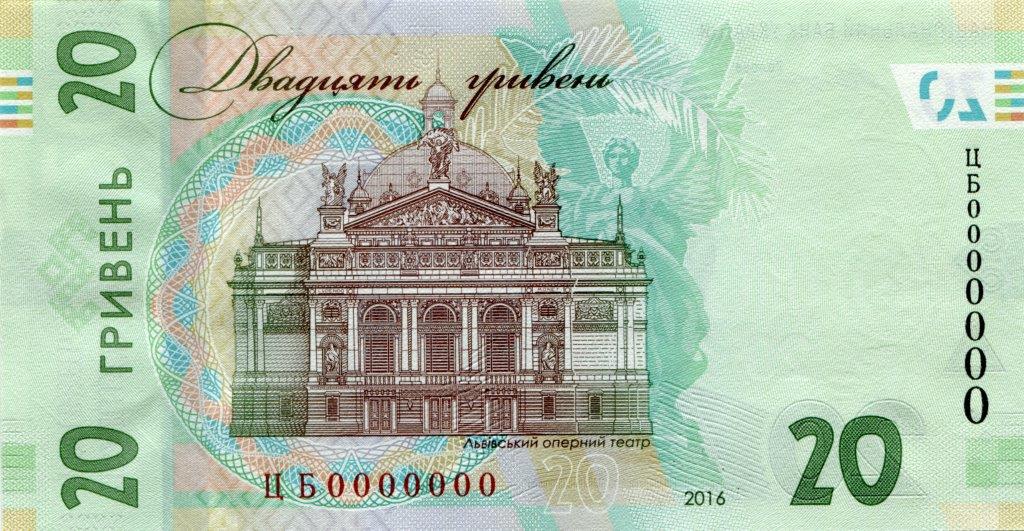 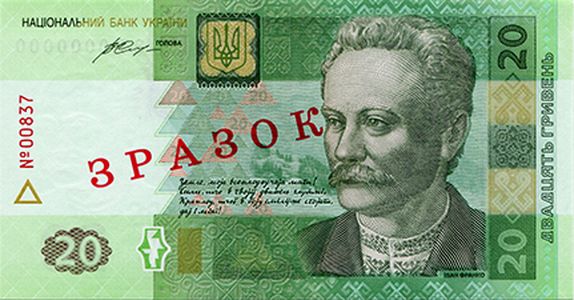 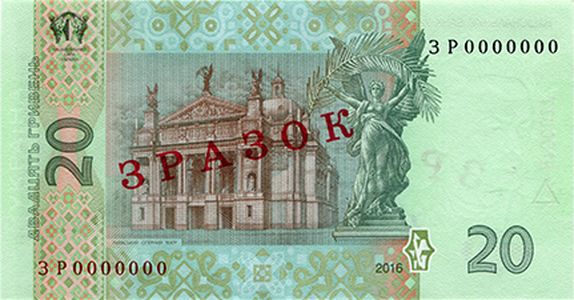 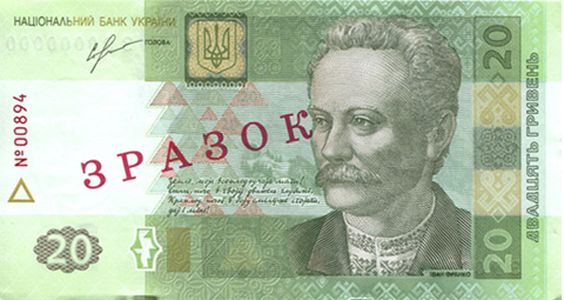 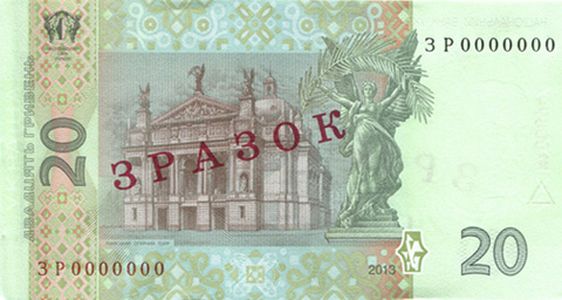 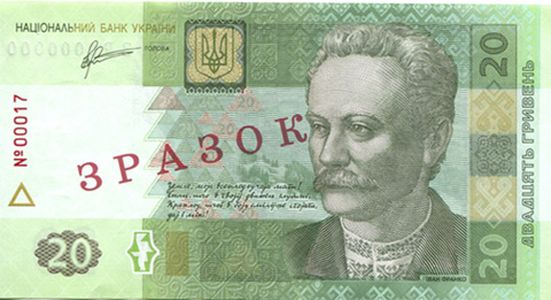 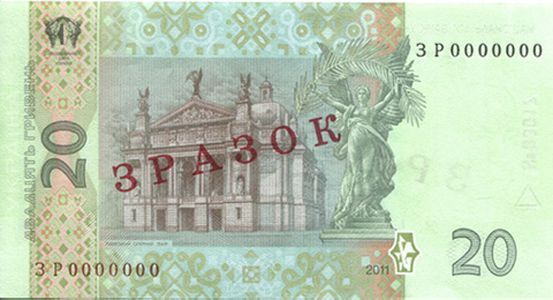 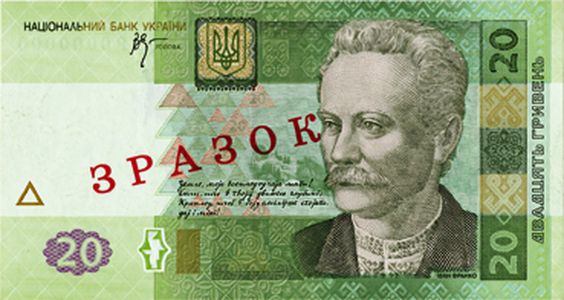 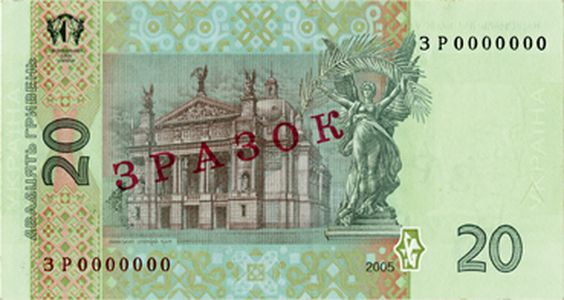 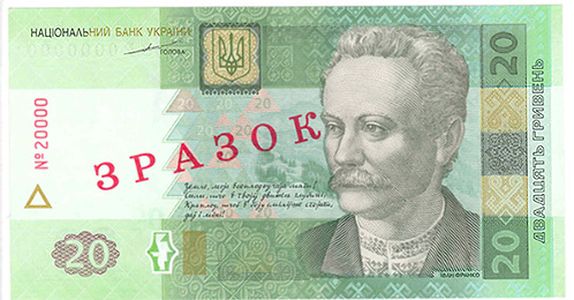 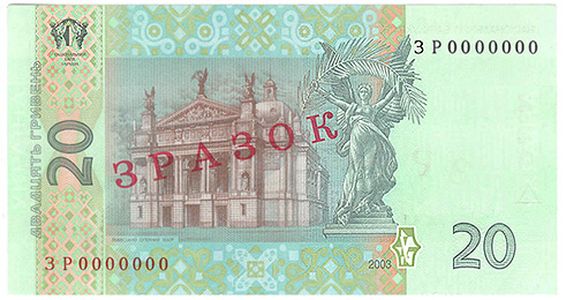 The new banknote like all previous banknotes of this denomination bears a portrait of I. Franko on its face and the building of the Lvyv Opera House on its back.

Lvyv Opera House was built in 1900 by the design of architect Z. Gorgolevsky.

The banknote is printed on the tinted paper of greenish color matching the prevailing color of the images on the banknote.

The rosette with numerical indication of the denomination printed with the ink changing its color when viewing at different angles: crimson-violet in perpendicular position and olive-green at a sharp angle.

A fully embedded into the paper polymer coded thread with the following transparent direct and inversed images: “20 ГРН”, a trident and the denomination “20” (in two lines). In UV light glows in green and blue colors.

Graphic elements on the face of the banknote are printed in special printing when the ink is raised above the paper surface and can be felt by touch: a) the sign for the blind; b) the portrait; d) inscriptions; e) numerical indication of the denomination; f) IZARD.

8. Light Element of the Watermark

The numerical indication of the note denomination which is visible up to the light.

The serial number is printed in high printing with black inks with magnetic properties.

The serial number printed with red inks glowing under the UV light in yellow-red color. 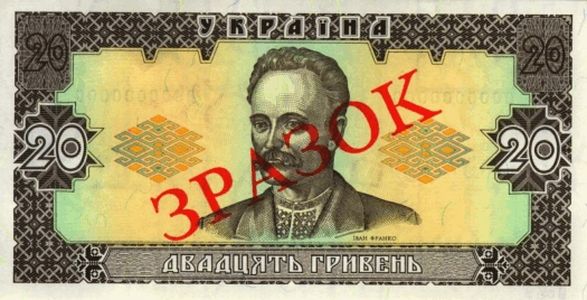 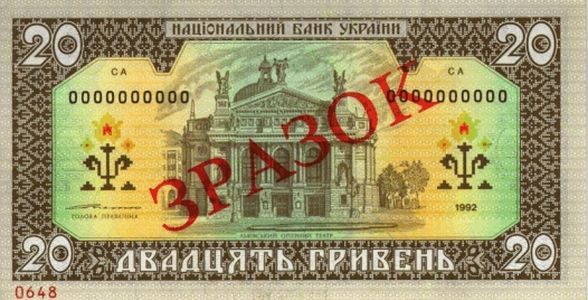