History of the Central Bank of Ukraine

During Ukraine’s struggle for independence from 1917 to 1921, the introduction of a national currency and the establishment of an independent banking system were of great importance in creating a sovereign Ukrainian state.

On 22 December 1917, the Central Council adopted a law declaring the Russian State Bank’s Kyiv branch Ukraine’s state bank. Mykhailo Kryvetskyi was appointed the first director of the bank. It was Kryvetskyi who signed the first banknote issued by the independent Ukrainian state – the 100 karbovanets banknote, which was put into circulation on 5 January 1918.

One karbovanets was equivalent to 17.424 measures of pure gold, with one measure equaling 0.044 g of gold. The banknote was officially known as a State Bill of Credit. A total of 55,000 banknotes, with a total worth of 5.5 million karbovanets, were issued. The banknote was designed by the prominent Ukrainian graphic artist Heorhiy Narbut.

Those were difficult times. In late 1918, the Bolsheviks occupied Kyiv. They forced open the safes of the Ukrainian banks and their branches in all cities, transferred the money to the State Bank of the Russian Soviet Federative Social Republic, and confiscated bullion gold and gold coins.

On 3 March 1918, Kryvetskyi was replaced by Volodymyr Ihnatovych, a member of the Kyiv Old Community (an organization involved in community, cultural and educational activities), a financier, and an ardent supporter of everything Ukrainian. During his tenure, Ihnatovych signed six banknotes issued by independent Ukraine.

Kostiantyn Klepachivskyi, one of the State Bank’s first employees and co-founders, was the last director of the bank. It was he who, following many changes of location, finally had to evacuate the State Bank in 1920 to the Polish town of Częstochowa. Unfortunately, the bank’s documents and archives disappeared without a trace after the Germans took everything away in August 1944. 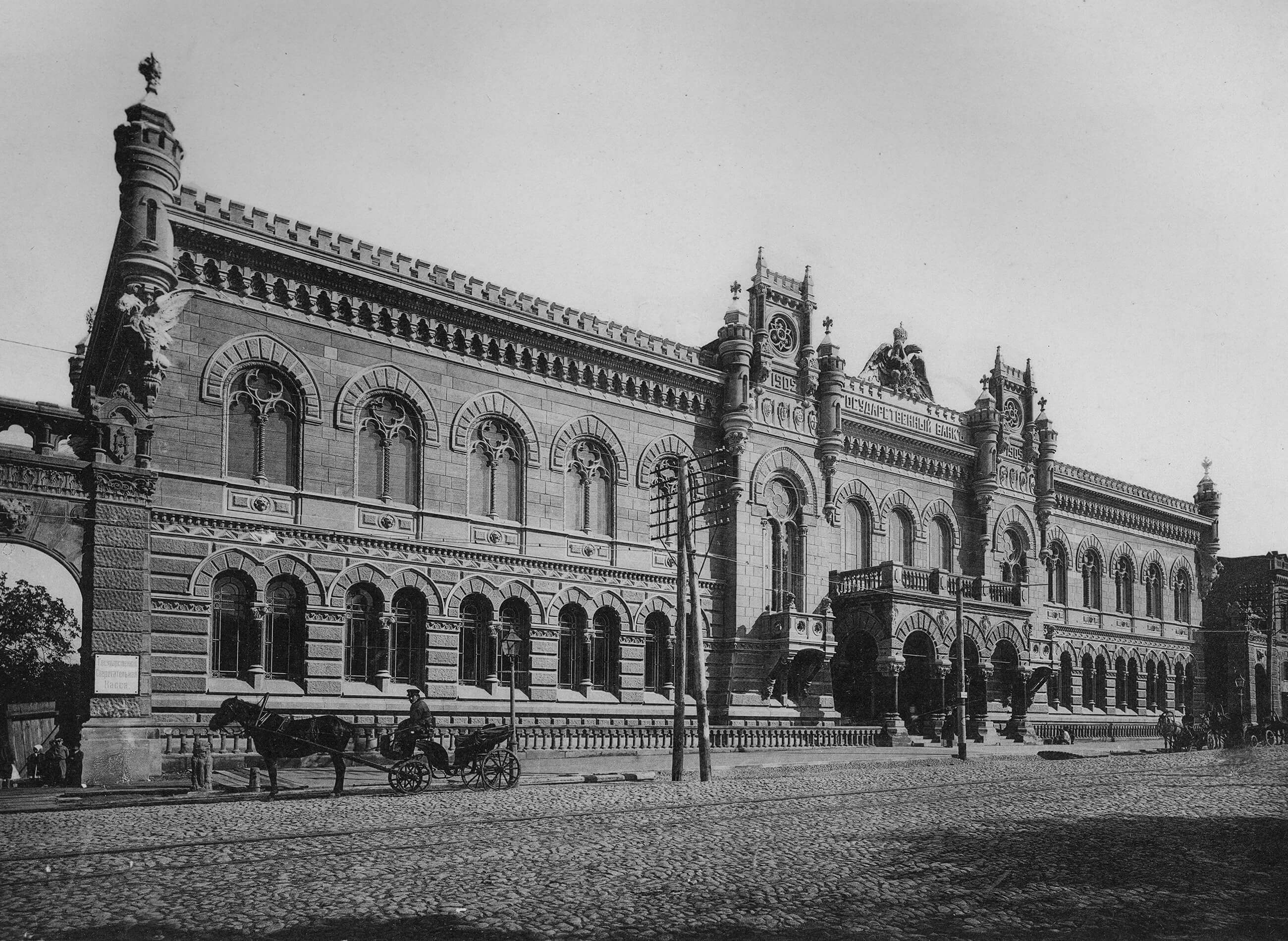 That law also established an independent two-tier market banking system, with the central bank being the first tier, and other banks being the second tier.

The NBU building is both an architectural gem of Kyiv and a perfect example of the scientific and technological achievements in construction of the early 20th century.

The building’s main architect, Oleksandr Kobelev, experimented with various historical epochs by combining north-Italian Gothic style and early Florentine Renaissance in the building’s amazing design. The Italian architect Emilio Sala, who also made the sculptures on the famous House with Chimeras, was invited to create the interior decorations.

Although looking romantic on the outside, on the inside it is a precise mechanism built to ensure the effective operation of the country’s central bank.  The building boasts spacious and convenient rooms, strong and durable constructions, as well as safe and technologically innovative air conditioning and fire prevention systems. 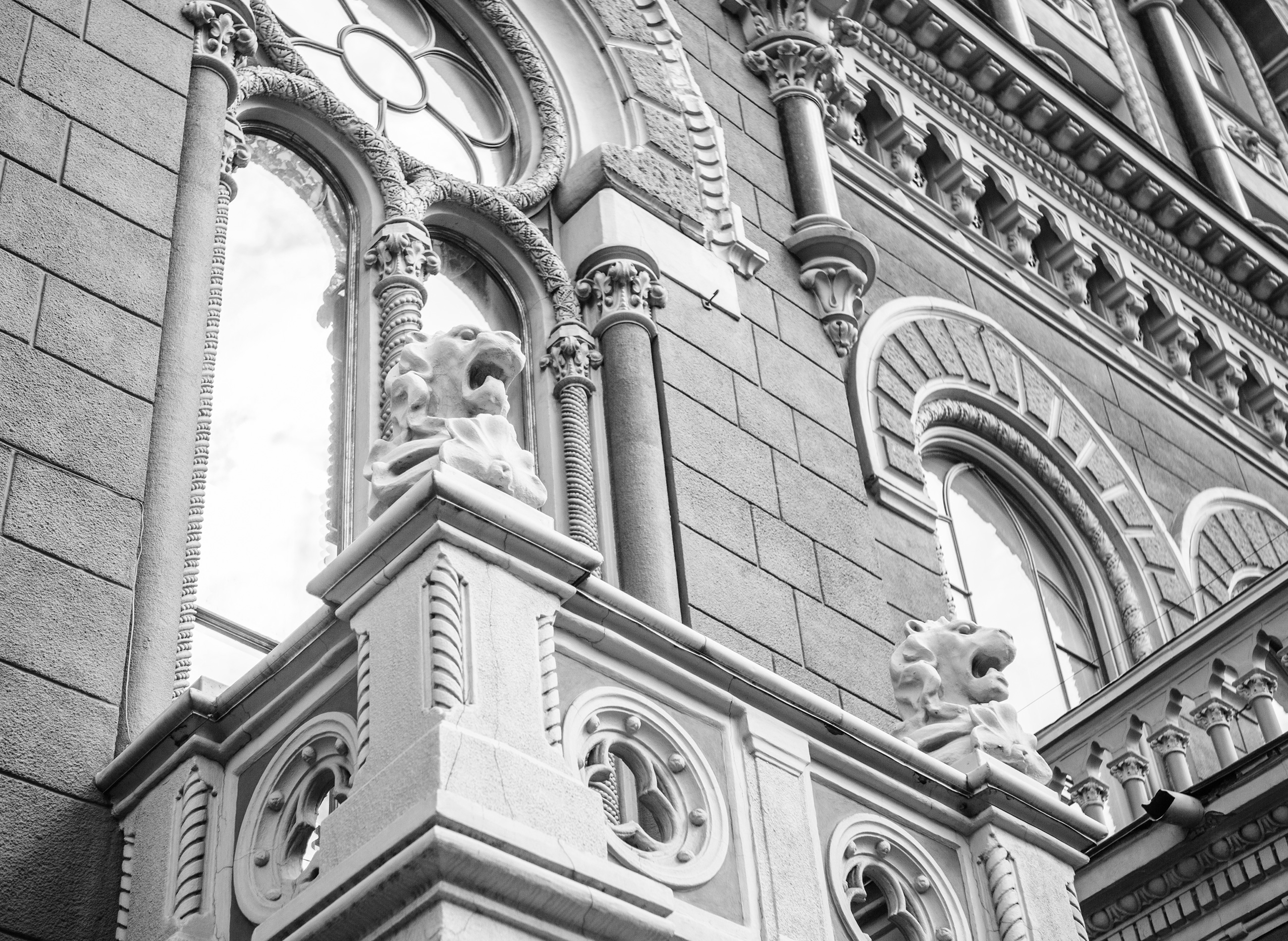 History of the Building

A search for solutions to the problem began in 1891. The director of the bank’s Kyiv branch, Georgii Afanasiev, studied the layouts of Deutsche Bank in Berlin, Credit Lyonnais in Paris, and the bank’s Moscow headquarters. However, it was not until the autumn of 1902 that the foundations of the present NBU building were laid.

The architect Oleksandr Kobelev won the architectural contest launched to construct a new building. He produced the best office layout for the potential number of staff and the required banking transactions, to ensure that banking business was done quickly and smoothly. The building’s designers sought to take the bank’s development for the next 50 years into account!

The project was carried out by the best builders.  Various types of construction work was given to about twenty carefully selected contractors.

The building employed the most advanced technologies of the time. The bank had steam central heating, electric lighting, and a fire protection system, which was the first of its kind in Europe. The most impressive thing, however, is the building’s complex ventilation system, which accounted for one ninth of the project’s total budget. The system’s special air vent collectors, which used to blow the scent of roses into the bank’s premises, are still in good working order. Unfortunately, they have been idle since the bank’s magnificent rose house was replaced with garages in Soviet times.

After the return of the Ukrainian capital to Kyiv in 1934, it became obvious that the central bank’s premises no longer met the requirements of the time. A risky but very successful project to add two stories to the building was carried out that year by Oleksandr Kobelev together with his apprentice Valerian Rykov.

The project’s difficulty was staggering: instead of being removed, the roof was cut with thermal lances into seven pieces, which were then raised with adjustable jacks. The roof, which was raised to a height of 12 meters, weighed 330 tons and had a perimeter of 400 meters. A third and a fourth story were added at the same time. When the walls were put into place, the portions of the roof were placed on cast-iron blocks, and then welded together. 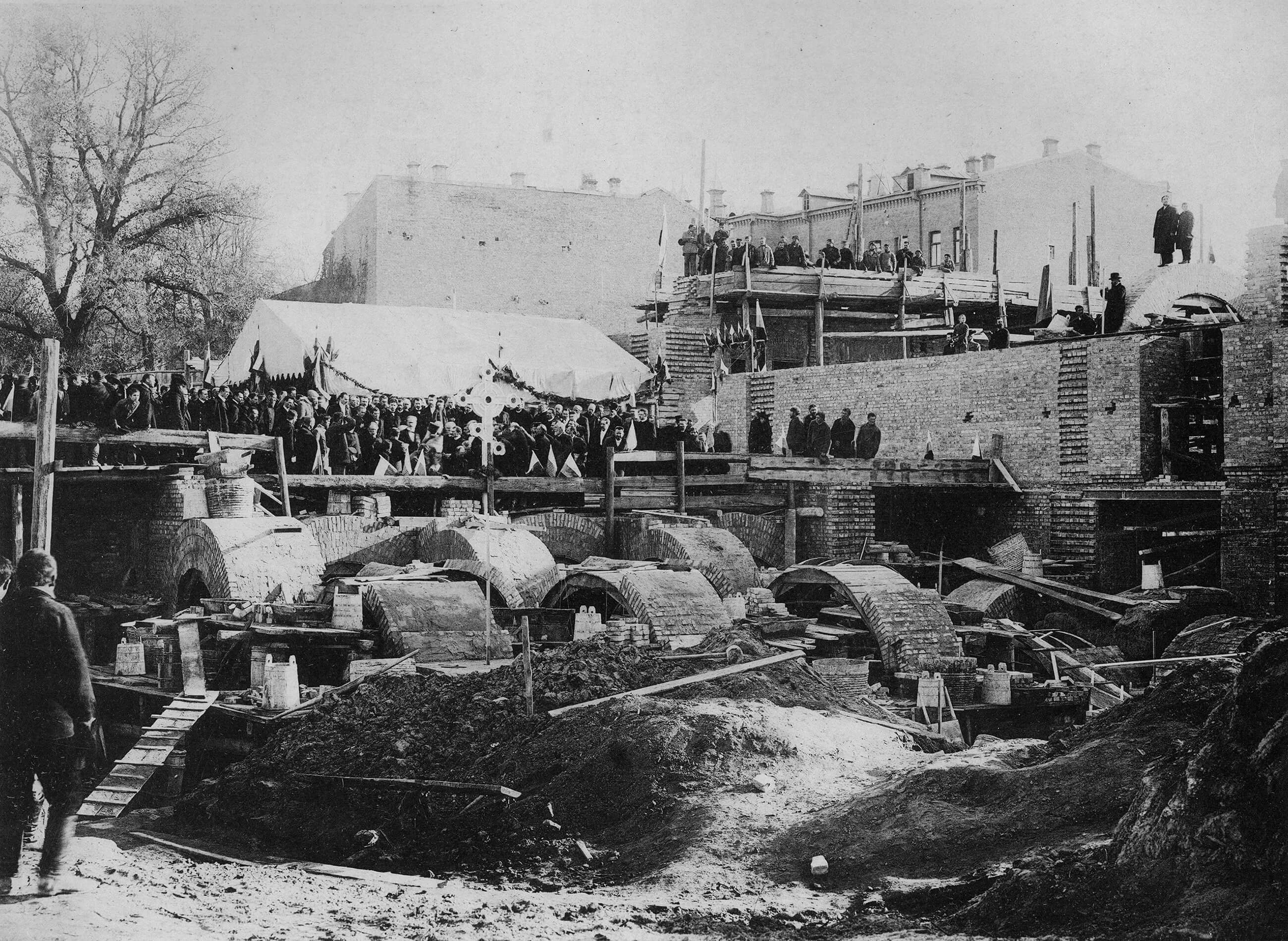 Guarded by Gods and Angels

The building’s purpose is underlined not only by its practical and functional part, but also the symbolism in its design.

The facade, which bears the coats of arms of the three provinces serviced by the central bank at the time - Kyiv, Podil, and Volyn, was decorated by the architect Oleksandr Verbytskyi.   Near the coats of arms are four emblems of the four areas that require banking loans:

The gaze of the griffons is fixed on Instytutska Street.  In ancient mythology, griffons guarded the gold mines of the Scythians.

The bank’s lush operational hall features sculptures of the gods of antiquity:

In the center of the ceiling is a figure of the Archangel Michael, Kyiv’s guardian and protector, clad in armor worn by Roman army commanders. This figure of the archangel, which was by created in 2006 by Lviv craftsmen, is the third in the building’s history. The first figure perished in the 1934 reconstruction, and the second figure was installed in 1995 after the operational hall was overhauled.

A New Page in the Building’s History

After Ukraine became independent in 1991, the time came again to expand the NBU’s building. A porch with columns was added to the first building, making its facade similar to its original appearance.

The building, designed by the architect Kobelev and built by thousands of unknown craftsmen, fascinates Kyiv residents and visitors alike.  The building’s artistic perfection makes it one of Kyiv’s most artistic and best-preserved architectural monuments. 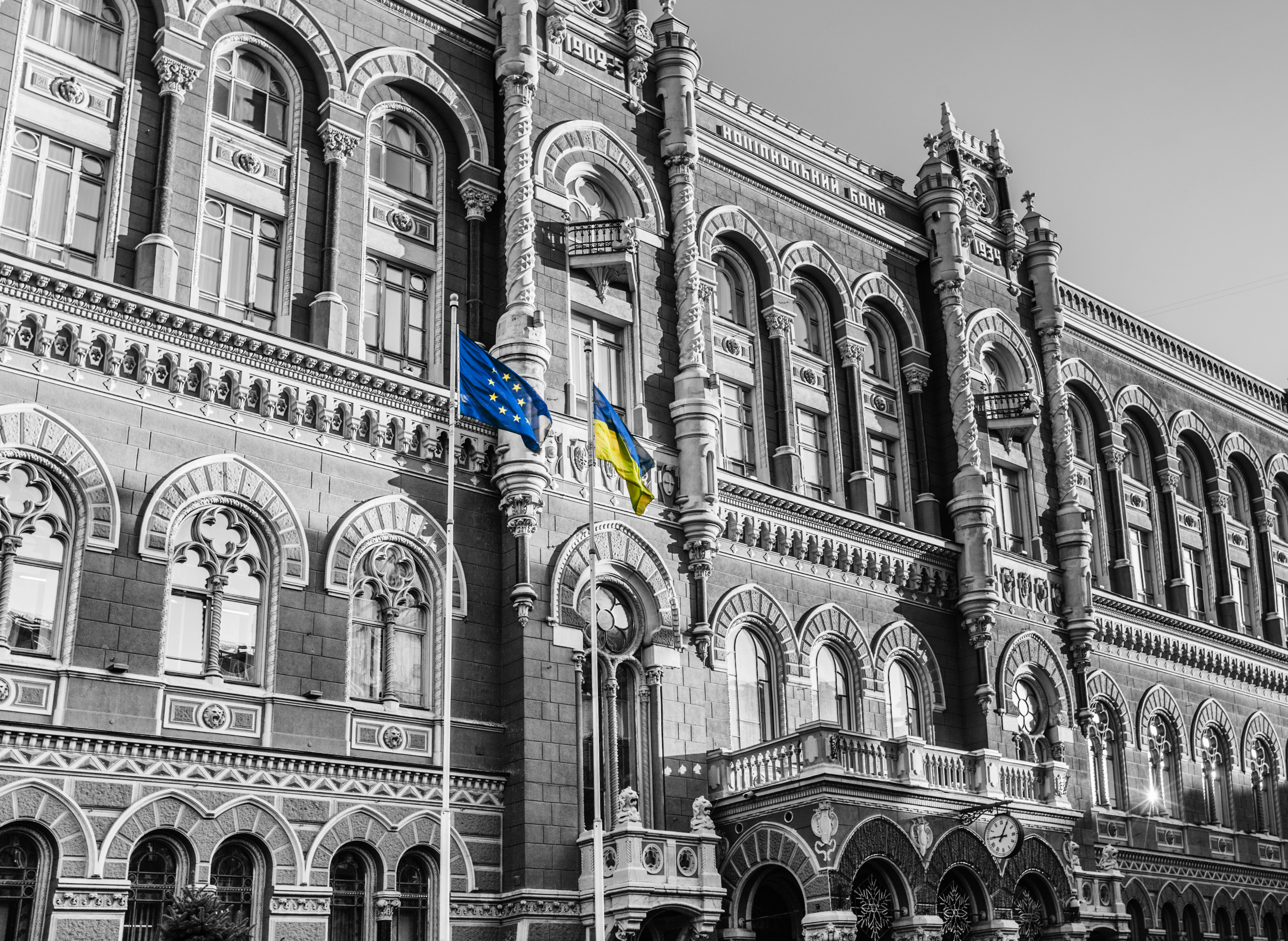