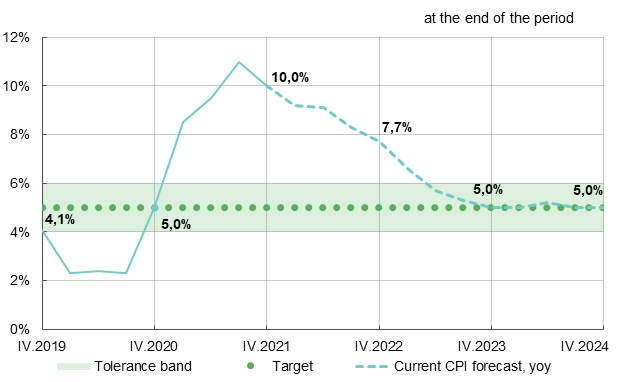 Macroeconomic and Monetary Review, May 2022

Presentation to the press briefing on monetary policy, January 2022

Presentation to the press briefing on monetary policy, October 2021

Does price stability mean no change in prices?

Price stability does not imply that prices do not change; it means that prices grow at a moderate pace.

No central bank seeks to achieve zero inflation. Inflation being close to zero poses the risk of deflation that is just as bad for the economy as high inflation.

Why doesn’t the NBU fix the exchange rate at a certain level?

In a case like this, the NBU would have to sell foreign currency from its stocks, the international reserves, in order to fix the exchange rate at a certain level. However, this treats the symptoms, not the illness. The problem that has made demand for foreign currency exceed the supply will continue to weigh on the economy. Holding the hryvnia exchange rate at a non-market level drains the international reserves. When reserves are depleted to the extent that they are not sufficient to support the fixed exchange rate, the domestic currency collapses. Most often, that is accompanied by an economic crisis, which undermines welfare of households, stability of the banking system, and solvency of the country. This happened twice in Ukraine over the last decade – in 2008 and 2014.

On the other hand, the floating exchange rate allows producers and consumers to adapt to the changing economic environment and withstand negative shocks. For example, lower global prices for Ukrainian exports lead to a decline in inflows of foreign currency proceeds to the country. In this case, the hryvnia exchange rate would gradually go down, which lowers the production cost of goods in dollar terms. This would mitigate the adverse impact on output. In other words, depreciation of the hryvnia maintains competitiveness of Ukrainian goods abroad, which means that there is no need to reduce the output.

Obviously, the weakening of the domestic currency has negative consequences as well: imported goods and foreign travel become more expensive for households. Nevertheless, this is a lower price to pay compared to a decline in output and an increase in unemployment.

Why doesn’t the NBU print enough money to finance the country’s needs?

Money is a special commodity, but, like all other commodities, it carries value only if limited in quantity. In case a central bank issues (or, as people sometimes say, “prints”) money to cover government spending, it increases the amount of money in circulation greatly. However, the total demand for goods and services grows faster than the economy’s capacity to produce them, which would imminently translate into higher inflation.

That is, using money issue to finance the country’s needs can lead to adverse effects for the economy and public welfare, due to:

How does the NBU issue money?

The initial issue of money is always conducted in cashless form through banks only (as the NBU operates exclusively via banks). The NBU can issue money using three channels:

Issue of cash always derives from the noncash issue of money. A bank asks the NBU to debit its account and receives cash at the NBU’s cash desk. After that, the bank can distribute cash to its customers by debiting cash funds from their accounts. At the same time, the amount of money in the economy does not change: of cash hryvnia decrease, while hryvnia cash grows by the same amount.

NBU Annual Report 2021: Key Indicators of Changes That Took Place in the Economy and Financial System Over the Year