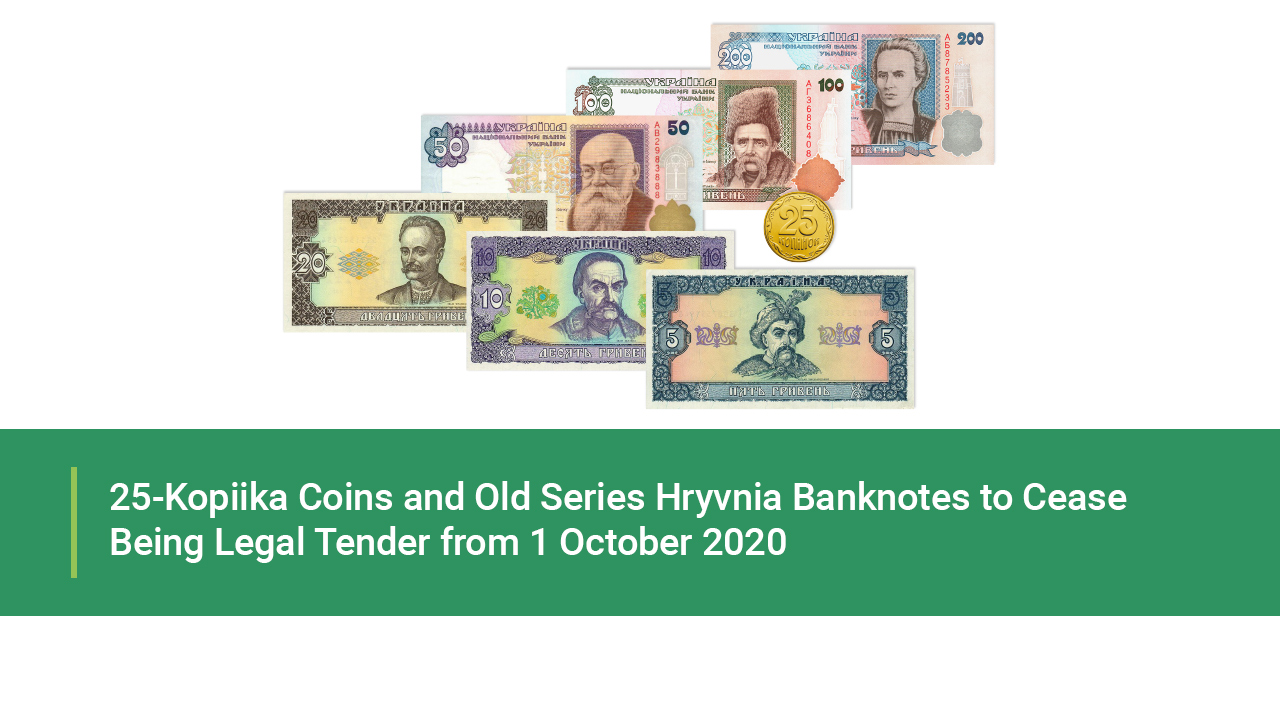 In particular, the regulator took the following steps to improve cash circulation:

"We continue to harmonize cash circulation and bring it in line with global standards," told Oleksii Shaban. "The main objective behind our decisions is to streamline and smooth out cash settlements for users. We also consider the economic feasibility and improving the quality of cash in circulation."

The decisions announced today by the NBU followed the regulator’s longstanding efforts to optimize the cash circulation.

"After the withdrawal, the number of hryvnia denominations will reduce from 17 to 12. The new denomination series will consist of 6 coin denominations and 6 banknote denominations in line with the international practice and become streamlined and seamless," noted the NBU Deputy Governor.

Streamlining and smoothing out cash settlements

Today, 25-kopiika coins cannot be exchanged for smaller denomination coins due to the withdrawal of 1, 2 and 5 kopiikas from circulation last year. After their withdrawal the issue will be resolved.

Withdrawal of 25-kopiika coins will simplify cash settlements. This will have no effect on inflation since without 25 kopiikas the rounding rules will be applied to receipts when the amount of a cash transaction involving goods and services can be rounded to the closest values divisible by 10 kopiikas*.

The old design banknotes introduced in 2003 fail to perform the legal tender function. The number of these notes stays at 1.8% of the total number of banknotes in circulation. Over the last three years, the number of these notes in circulation has hardly changed. That means that households hardly ever use such notes for settlements and banks neither recieve nor process said notes. The withdrawal will do no harm to the public and will be of benefit for both business and the state.

The state and other participants of the cash circulation will now reduce their expenses on production, processing, transportation, and storage of banknotes and coins.

Improving the quality of cash in circulation

The NBU attaches great importance to the security and quality of hryvnia in circulation. The Ukrainians must be guaranteed that cash they receive at retailers, bank cash desks or bank ATMs is fit for commerce and circulation.

Furthermore, an excessive variety of banknotes and coins causes only chaos in wallets and requires more time to make payments.

The withdrawal of outdated banknotes of the previous series and a gradual replacement of unfit 1- and 2- hryvnia banknotes and circulating 1-hryvnia coins of the 2018 design with new coins will advance the security and quality of money and streamline settlements.

On timeframes and withdrawal mechanisms:

According to Viktor Zaivenko, Director of the Cash Circulation Department, 25-kopiika coins and all the outdated banknotes introduced before 2003 will cease being legal tender in Ukraine in nearly a month, starting from 1 October 2020.

"After the date, said banknotes and coins will not be accepted in payment for goods and services and the NBU will commence their withdrawal from cash circulation. Thus, starting from 1 October 2020, all stores, restaurants, and service providers have to cease accepting them and hand over all the remaining coins and banknotes in question to bank cash desks until 16 October to be credited to their respective accounts," explained Viktor Zaivenko.

At the same time, the public will be able to exchange 25-kopiika coins and old banknotes introduced before 2003 without limitation and free of charge for coins and banknotes of other denominations and designs over the next three years:

Furthermore, starting from 1 October 2020, the NBU will foster the withdrawal of 1- and 2-hryvnia banknotes of the 2003–2007 designs and circulating coins of 1 hryvnia of the old design minted before 2018 (in golden color). When said cash is received by banks, it will be withdrawn from circulation and delivered to the NBU.

However, in contrast to the outdated banknotes, and coins of 25 kopiikas, 1- and 2-hryvnia banknotes of the 2003–2007 designs and circulating coins of 1 hryvnia of the old design minted before 2018 will for now remain legal tender. There is no need to exchange them, as they will continue to be used for payments. At the same time, the number of said coins and banknotes will gradually decrease and be replaced with respective silver-colored coins of 1- and 2- hryvnias of the 2018 design.

For the period from 1 October 2019 to 31 August 2020, 77.5 million low-denomination coins were withdrawn from circulation, whereof:

Requirements to further optimization of the hryvnia denomination series for streamlining the cash circulation and smooth cash settlements in the country are set out in the following regulations:

* Under the rules approved by NBU Board Resolution No. 25 On Optimization of Circulation of Low-Denomination Coins dated 15 March 2018, and pursuant to paragraph 23 of the Procedure for Trade Operations and Rules of Trade Servicing on the Consumer Goods Market approved by Resolution of the Cabinet of Ministers of Ukraine No. 833 dated 15 June 2006 (as amended).

Tags
hryvnia
Theme news
Winners of the Best Coin of the Year Competition for 2019
9 Jun 2020 15:00
Ten-Hryvnia Coin is Now in Circulation
3 Jun 2020 9:00
Banknotes and Coins of Ukraine Catalogue to Resume Publishing
22 May 2020 16:05
All news
Subscribe for notifications
Subscribe Unsubscribe
Share