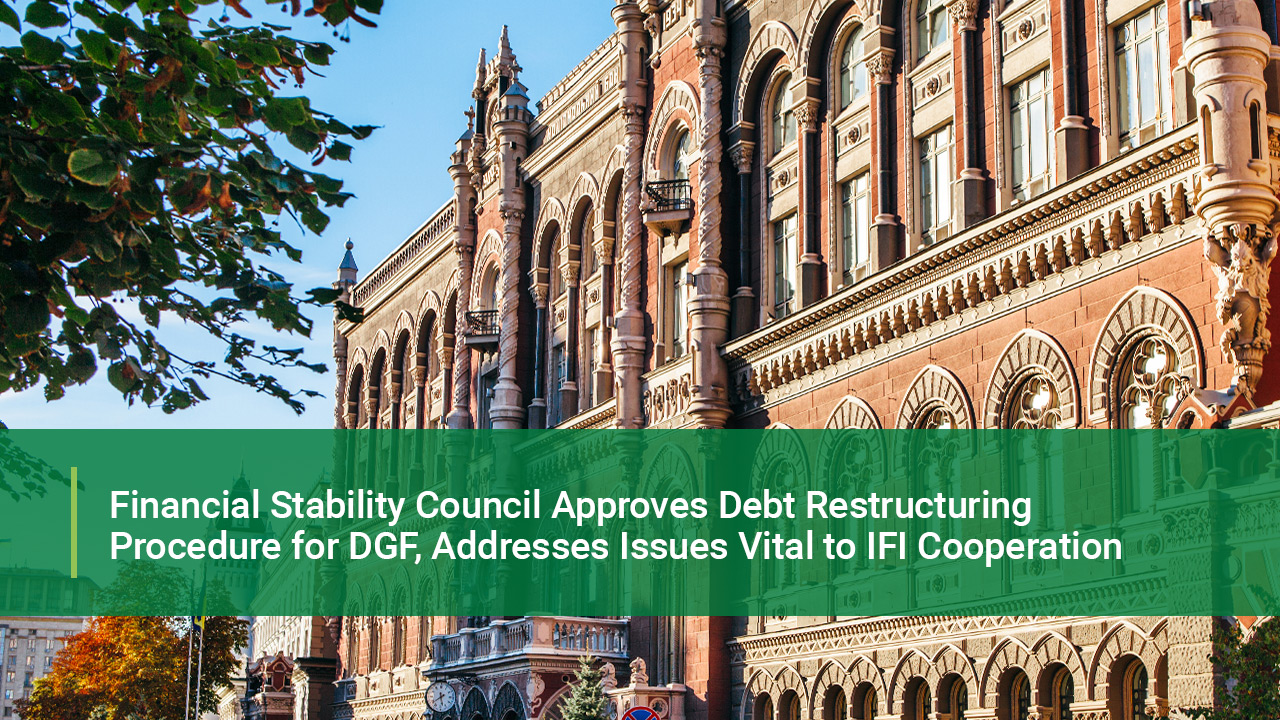 The Financial Stability Council (FSC) held a scheduled meeting on 2 September. The participants focused on restoring the solvency of the Deposit Guarantee Fund (DGF), adding Oschadbank JSC to the deposit guarantee system, and mitigating risks to cooperation with international financial institutions (IFIs).

To ensure that insolvent banks’ depositors can receive their payments on time and in full, the DGF was forced to take out loans from the government and the NBU, the FSC members pointed out as they discussed the DGF’s financial resilience. As of now, the DGF owes the government UAH 48.1 billion in principal and interest on these loans. The principal amount is the combined face value of the relevant bills of exchange. These commitments must be met by 2031. Having made sizable repayments to depositors in 2015–2017, the DGF had to direct all of its available funds to repay these loans, thus diverting resources from maintaining the stability of the deposit guarantee system.

To ensure that the deposit guarantee system remains stable, the DGF’s current commitments and future interest payments to the government need to be converted into contingent commitments, the FSC members recommended during the meeting.  To repay interest on the bills of exchange, the DGF will use the funds recovered from the banks’ former owners and related parties that drove those banks into bankruptcy, and the funds the DGF is owed for making guaranteed payments to the banks’ depositors.

To repay the principal amount of the bills of exchange, the DGF will use its accumulated funds in excess of the amount the DGF requires to keep operating, which is at least 2.5% of the total value of deposits guaranteed by the DGF.

Directing the surplus funds to meet contingent commitments will not erode the DGF’s financial standing either.

The scenario supported by the FSC will enable the DGF to start raising the maximum publicly guaranteed deposit to UAH 600,000 once the DGF is done restructuring the commitments noted above. Implementing this recommendation requires legislative changes.

In line with the Memorandum of Economic and Financial  Policies signed in June this year, the FSC approved the limited-time Debt Restructuring Plan to restore the DGF’s solvency by year-end 2021.

The FSC members approved Oschadbank’s membership in the DGF, effective 1 January 2021. Given the bank’s large deposit portfolio and thus the need to make significant contributions to the DGF, the bank will be granted a transition period until 31 December 2023 in which to make regular payments to the DGF. Implementing this proposal of the FSC also requires amending the law.

The FSC also discussed the status of cooperation with IFIs. As far as financial sector reform is concerned, a series of steps have been taken toward meeting the country’s commitments to the IMF. In particular:

At the same time, there are still a number of obstacles and legal risks that need to be eliminated in order to intensify work with international partners.

Other significant risks arise from uncertainty over the appointment of a new head of Oschadbank and the blocking of competitions to fill other management positions at the bank. Delaying the appointment of a governing body of the systemically important bank, the country’s second-largest bank by retail deposits, creates risks to its financial stability and the financial stability of Ukraine.

In the context of the existing risks, the FSC also discussed the appeal to the Constitutional Court against the provisions of the Law of Ukraine On Banks and Banking and the Law of Ukraine On Households Deposit Guarantee System. Amendments to these laws were made as part of meeting cooperation commitments to IFIs. Were these laws or any of their provisions to be declared unconstitutional, the issues critical to the stability of the financial sector would have to be legislated anew.

Therefore, the FSC members agreed on the need to ramp up efforts to mitigate the risks that hinder the resumption of active cooperation with IFIs.

The FSC was established by a presidential decree in March 2015.

The FSC provides a forum for professional discussion of systemic risks that pose a threat to the national financial stability.