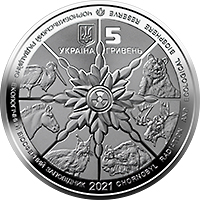 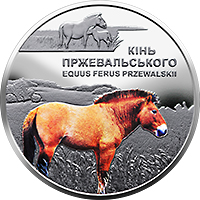 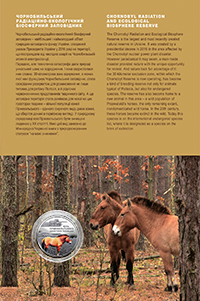 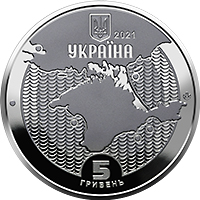 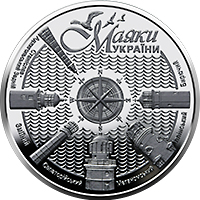 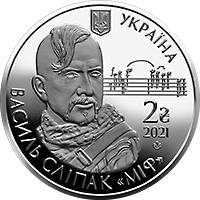 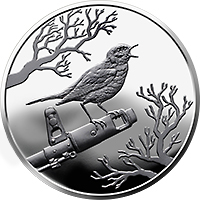 Vasyl Slipak
Nominal: 2 uah
Circulation start date: 21.06.2021
Material: german silver
Description:
This coin celebrates Vasyl Slipak, a hero of Ukraine, a recipient of the Order of the Gold Star and the Order for Valor, first degree, a knight of liberty, a volunteer, an ex-combatant in eastern Ukraine, and a volunteer soldier who was codenamed “Myth”. Slipak was a world-famous Ukrainian opera singer, a soloist of the Paris National Opera, one of the leaders of the Ukrainian community in France, and a member of the Association of Ukrainians in France. In 2015, he stopped performing on the world’s opera stages and started fighting Russian aggressors in Ukraine. On 29 June 2016, at the age of 41, Slipak was killed by a sniper bullet near the village of Luhanske.
Obverse: above is Ukraine`s small coat of arms, to the right of which is the semicircular legend УКРАЇНА (Ukraine); in the center, against a smooth background, is a portrait of Slipak, to the right of which are a music stave with notes, the coin’s face value – 2, the graphic symbol of the hryvnia, the coin’s issue year – 2021 and the mint mark of the NBU’s Banknote Printing and Minting Works; to the left is the following legend: ВАСИЛЬ СЛІПАК “МІФ” (Vasyl Slipak, “Myth”) (semicircular, below).
Reverse: against a smooth background is an image of a nightingale sitting on the barrel of an automatic gun; above and below are stylized tree branches.
Painter: Andrii Yermolenko
Sculptor: Volodymyr Atamanchuk, Anatolii Demianenko
Coins in circulation (planned/actual): 35000/35000
Mass, g: 12.8
Diameter, mm.: 31
Quality: special uncirculated
Coin edges: corrugated
Rebirth of Ukrainian Statehood 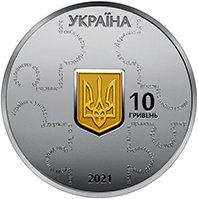 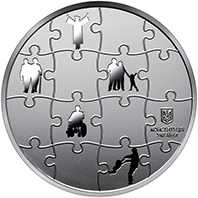 The 25th Anniversary of the Ukrainian Constitution
Nominal: 10 uah
Circulation start date: 21.06.2021
Material: silver
Description:
This commemorative coin celebrates the 25th anniversary of the Ukrainian constitution – a set of norms and principles that govern public relations and determine the organization of the state. It is the main source of national law, and the core of the entire legal system. The constitution strengthens the state, while also promoting its political unity and contributing to the social and economic development of society as a whole.
Obverse: against the matt background of a solved puzzle, the outlines of which consist of microtext containing quotes of some articles from the Ukrainian constitution, is Ukraine`s small coat of arms (gold-plated, in the center); above is the legend УКРАЇНА (Ukraine); to the right of the coat of arms is the coin’s face value 10/ГРИВЕНЬ (10/hryvnias); beneath is the coin’s issue year – 2021.
Reverse: against the matt background of a solved puzzle are smooth silhouette images that embody the Ukrainian people and symbolize that each Ukrainian is part of a whole, and that the constitution safeguards the rights of Ukrainians; to the right are Ukraine`s small coat of arms and the legend КОНСТИТУЦІЯ/УКРАЇНИ (Ukrainian constitution).
Painter: Vladyslav Yarovyi
Sculptor: Computer-aided design by Yurii Lukianov
Coins in circulation (planned/actual): 2500/2500
Weight of pure precious metals, gramme: 31.1
Diameter, mm.: 38.6
Quality: special uncirculated