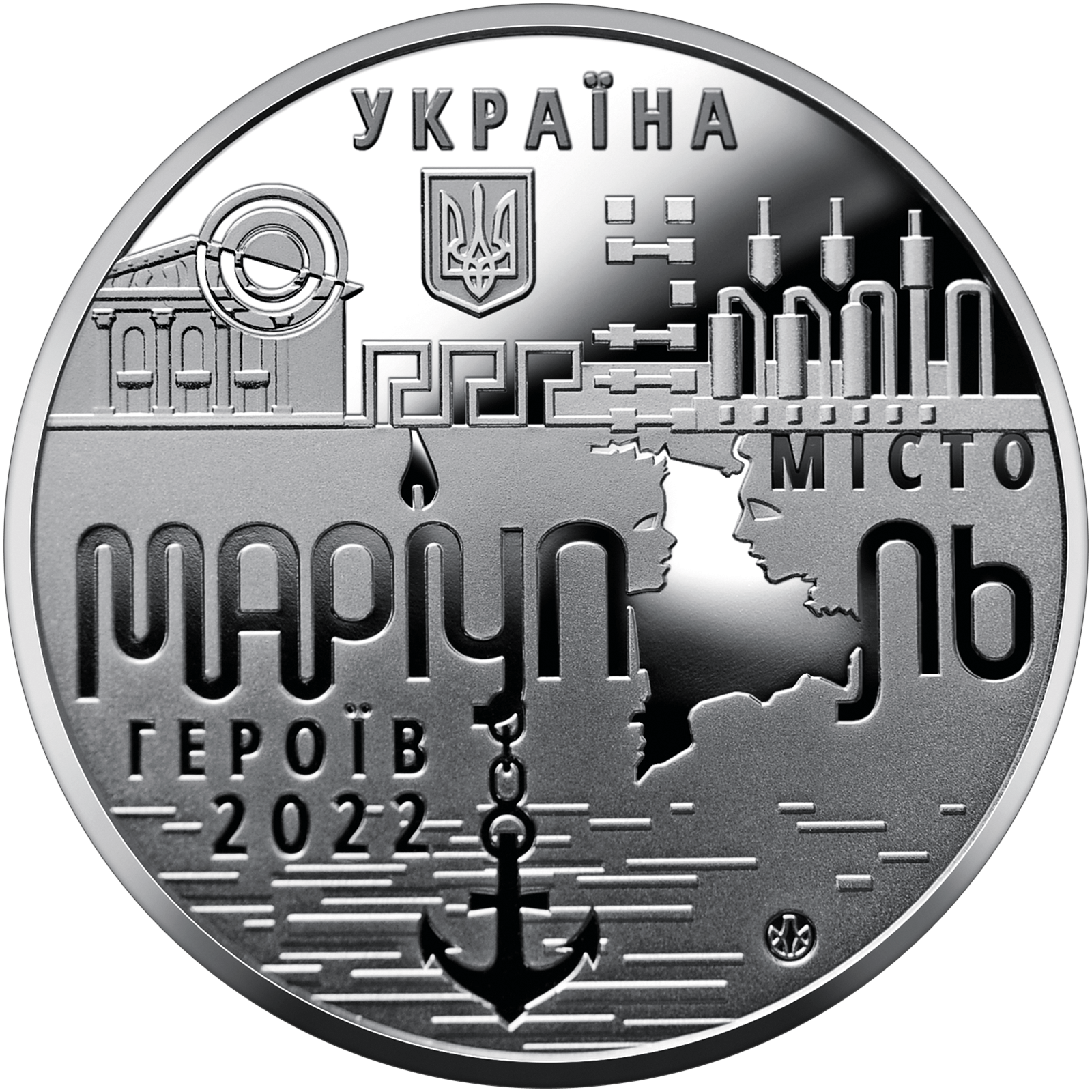 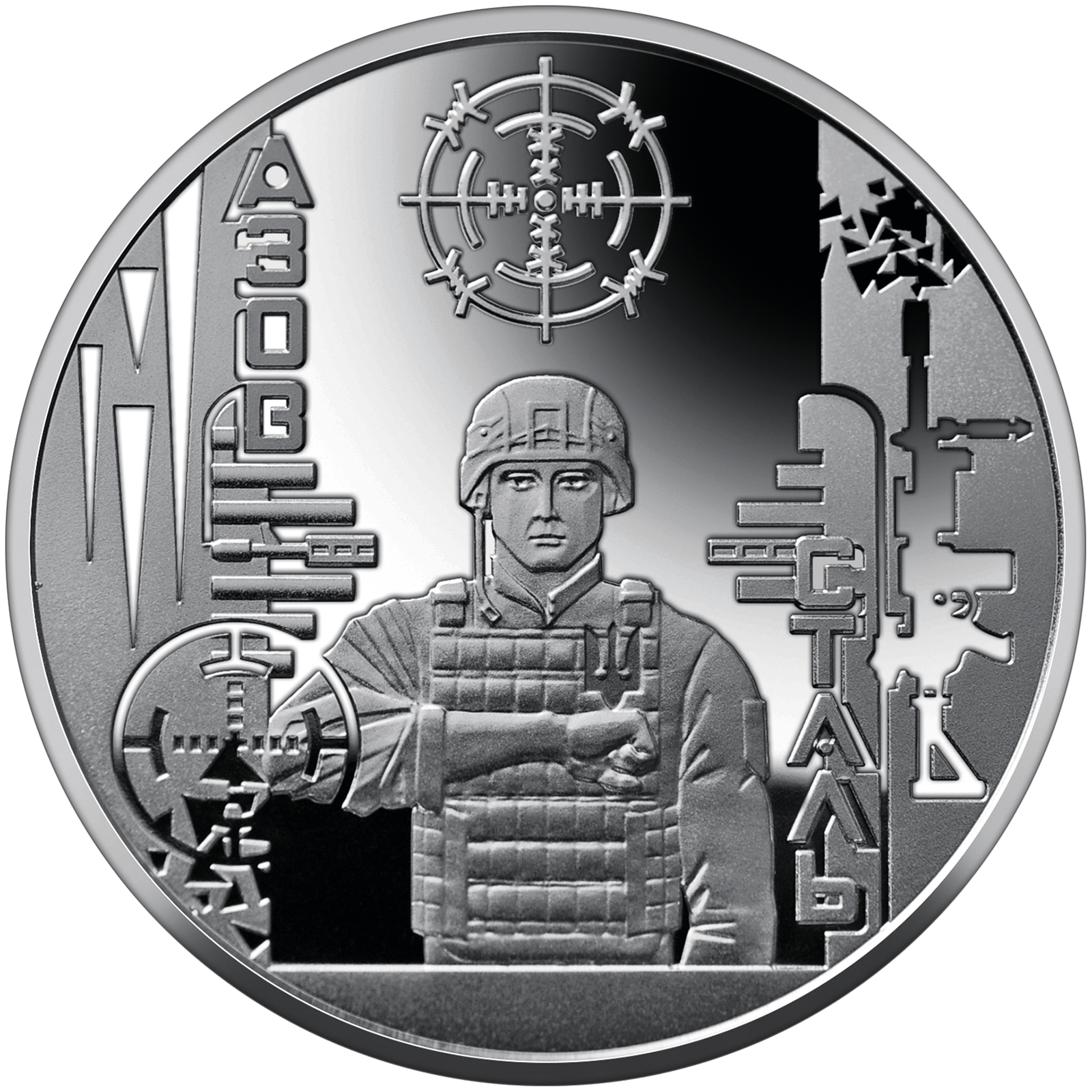 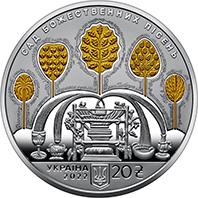 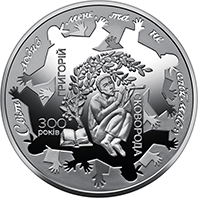 The Garden of Divine Songs
Nominal: 20 uah
Circulation start date: 22.11.2022
Material: silver
Booklet
Description:
This banknote celebrates the 300th anniversary of the birth of Hryhorii Skovoroda – a prominent Ukrainian philosopher, poet and teacher, who studied at the Kyiv Mohyla Academy. Skovoroda is one of the foremost figures in Ukrainian philosophy and literature. Skovoroda, whose thoughts focused on the vital and existentially important problems of human existence, remains an influential figure, thinker and writer. An organic combination of personal and public motifs is the most characteristic feature of Skovoroda’s poetry. The collection of poems “The Garden of Divine Songs” is a kind of lyrical diary of Skovoroda, describing events in the poet’s life, as well as his moral and philosophical reflections on the meaning of life, true happiness, goodness, honesty, and so on. The collection consists of 30 songs.
Obverse: beneath is Ukraine’s small coat of arms, to the left of the coat of arms are the legend УКРАЇНА (Ukraine) and the coin’s issue year – 2022; to the right of the coat of arms are the coin’s face value – 20 and the graphic symbol of the hryvnia; the main composition depicts a symbolic stylized fountain – an allegory of God – which fills various vessels with water – metaphors for humans and the human soul. On the one hand, the vessels are of different sizes, which makes them unequal. On the other hand, they are all filled with water, and therefore equal. Each vessel has a different volume, but receives enough water to be filled with it (a plastic representation of Skovoroda’s graphic picture “Equality Unequal for All.” Above the life-giving fountain, grow the “paradise trees” of the garden of divine songs, around which lines from the collection “The Garden of Divine Songs” are inscribed: EACH CITY HAS ITS CUSTOMS AND ITS LAWS, EACH HEAD ITS OWN INNATE INTELLIGENCE, EACH HEART SEEKS LOVING FOR ITS OWN SWEET CAUSE, EACH PALATE SAVORS THROUGH ITS OWN FINE SENSE. WITHIN MY MIND A SINGLE THOUGHT INTENSE SEEKS HOW TO LIVE, AND DIE, IN INNOCENCE... O FEARFUL DEATH! THOU SCYTHE THAT SLITS ALL LIFE! EVEN THE HEADS OF KINGS THOU SPAREST NOT. ALIKE TO CZAR AND PEASANT COMES THY KNIFE, DEVOURING ALL, LIKE STRAW IN BLAZES HOT. ONLY THAT MAN HER SHARP STEEL NEED NOT FEAR WHOSE CONSCIENCE, AT HIS DEATH, IS CRYSTAL CLEAR. above is the following legend: САД БОЖЕСТВЕННИХ ПІСЕНЬ (Garden of Divine Songs).
Reverse: there is the following metaphoric composition: a young man sitting under a cherry tree and playing a pipe; next to the young man is an open book – Skovoroda’s symbolic world; to the left of the young man are the legends 300 РОКІВ (300 years) and ГРИГОРІЙ (Hryhorii) (vertically); to the right of the young man is the vertical legend СКОВОРОДА (Skovoroda); around the young man are smooth symbolic outlines that are trying to catch the philosopher; above is the semicircular legend: СВІТ ЛОВИВ МЕНЕ, ТА НЕ СПІЙМАВ (The world tried to catch me, but failed).
Painter: Volodymyr Taran, Oleksandr Kharuk, Serhii Kharuk
Sculptor: Sviatoslav Ivanenko, Volodymyr Atamanchuk
Coins in circulation (actual/planned): 2500/2500
Weight of pure precious metals, gramme: 62.2
Diameter, mm.: 50
Quality: special uncirculated 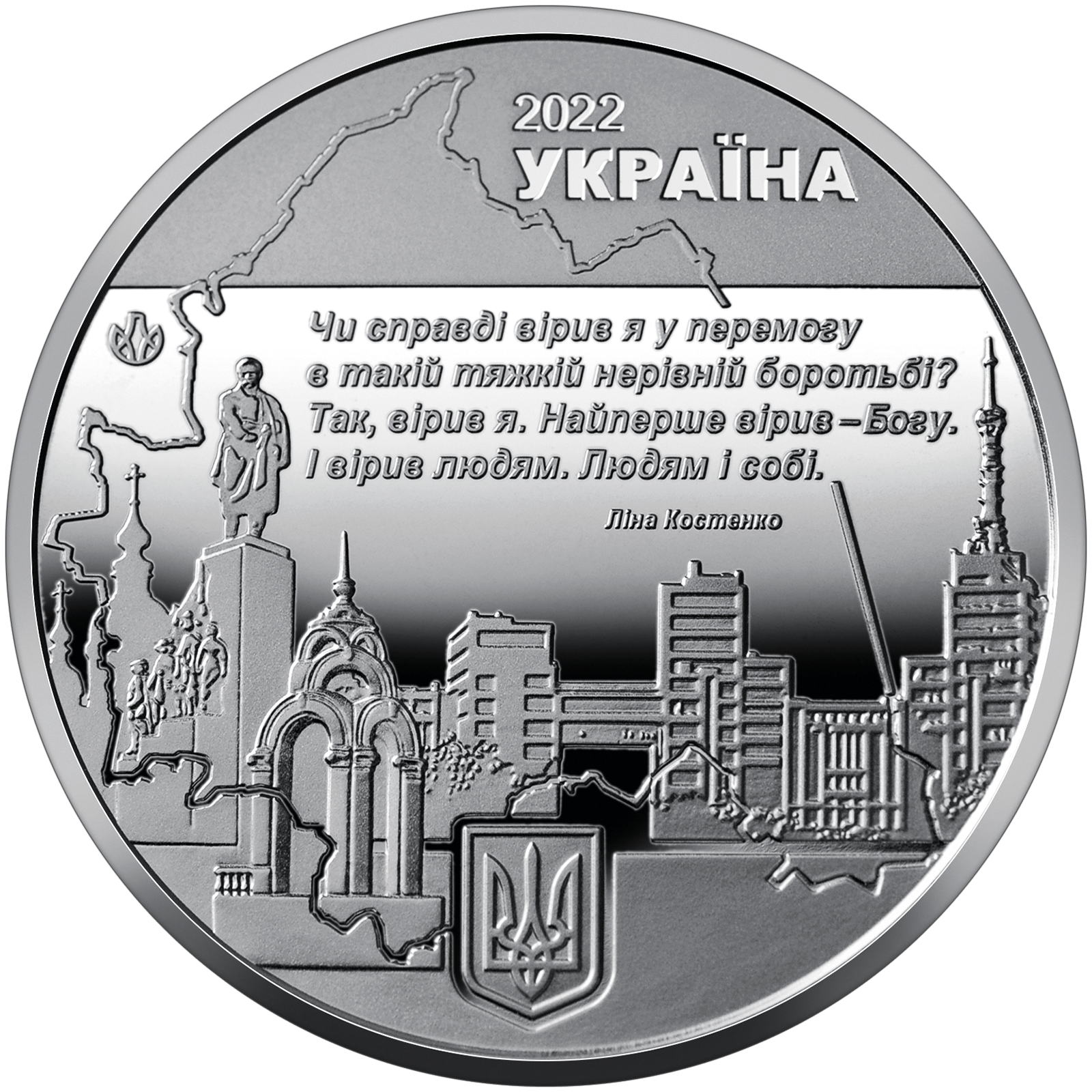 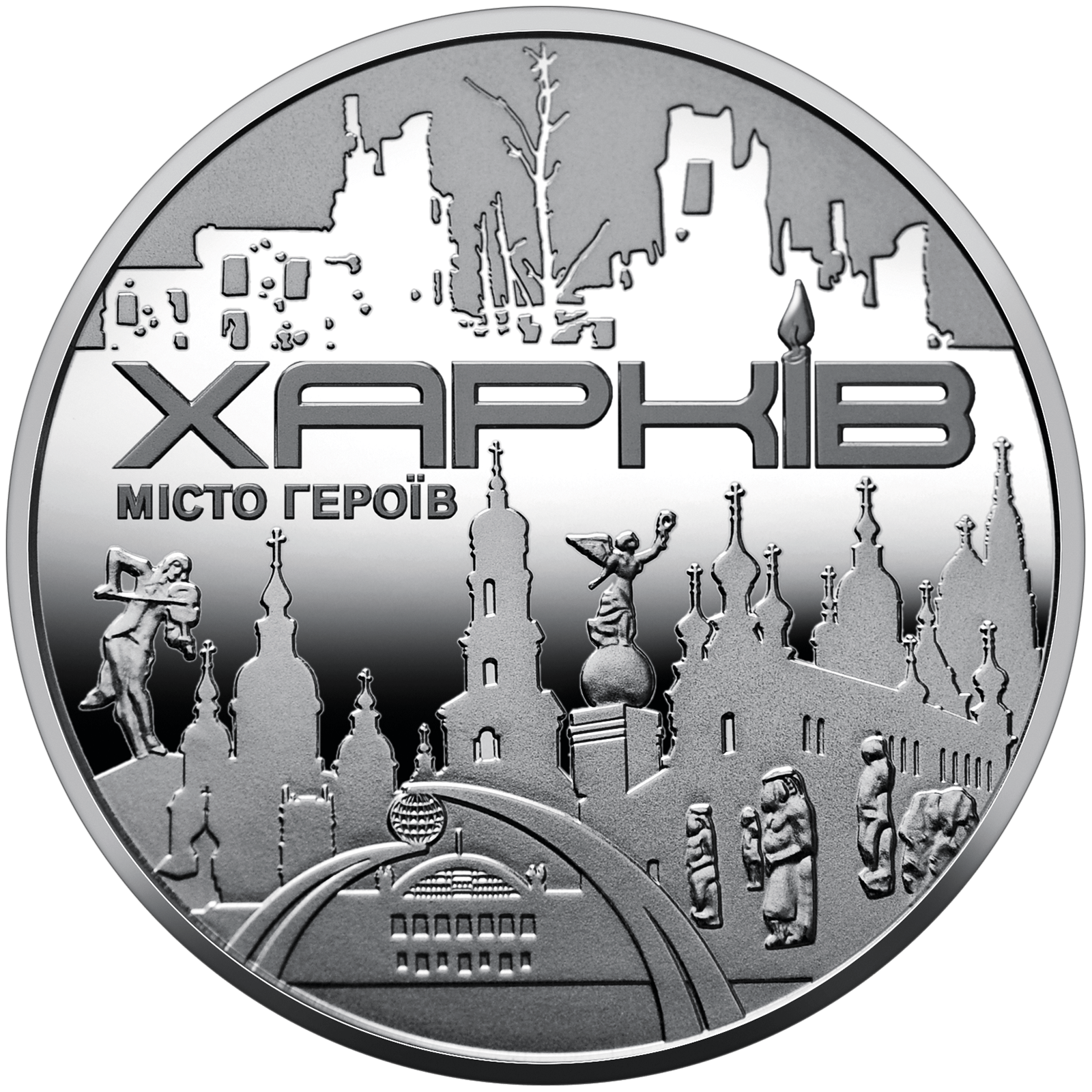 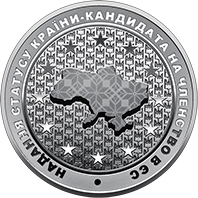 The Granting of the Status of Candidate for EU Membership
Nominal: 5 uah
Circulation start date: 18.11.2022
Material: german silver
Booklet
Description:
This coin commemorates the granting of EU candidate status to Ukraine. Obtaining the status is an important result of Ukraine’s long path to European integration. The summit of the European Council held on 23 June 2022 has gone down in history, while the positive decision of the EU’s leaders demonstrated solidarity with Ukraine in these difficult times for the country.
Obverse: against a smooth background, is a stylized image of the European continent, to the left of which is a decorative element in the form of mosaic decorations – symbolizing various nations and cultures, the freedom to make one’s own life choices, and the absence of formal borders; on the European continent, an outline of Ukraine is traced – showing that Ukraine, like a puzzle piece, completes the integrity of Europe and “returns” to its European home, in which the country has always had an indirect presence, which began with the dynastic ties of Kyivan Rus; to the right are Ukraine`s small coat of arms, the semicircular legend УКРАЇНА (Ukraine), the coin’s face value – 5, and the graphic symbol of the hryvnia; beneath are the coin’s issue year – 2022 and the legend ПОВЕРНЕННЯ ДОДОМУ (the return home); under the map of Ukraine is the mint mark of the NBU’s Banknote Printing and Minting Works.
Reverse: against the backdrop of stylized tridents is a map of Ukraine, decorated with a national embroidery ornament; the map is surrounded by 12 stars symbolizing the unity of European nations; there is the following circular legend: НАДАННЯ СТАТУСУ КРАЇНИ-КАНДИДАТА НА ЧЛЕНСТВО В ЄС (The Granting of the Status of Candidate for EU Membership).
Painter: Volodymyr Taran, Oleksandr Kharuk, Serhii Kharuk.
Sculptor: Volodymyr Demianenko. Computer-aided design by Yurii Lukianov.
Coins in circulation (actual/planned): 0/25000
Mass, g: 16.54
Diameter, mm.: 35
Quality: special uncirculated
Coin edges: corrugated
Download in Excel