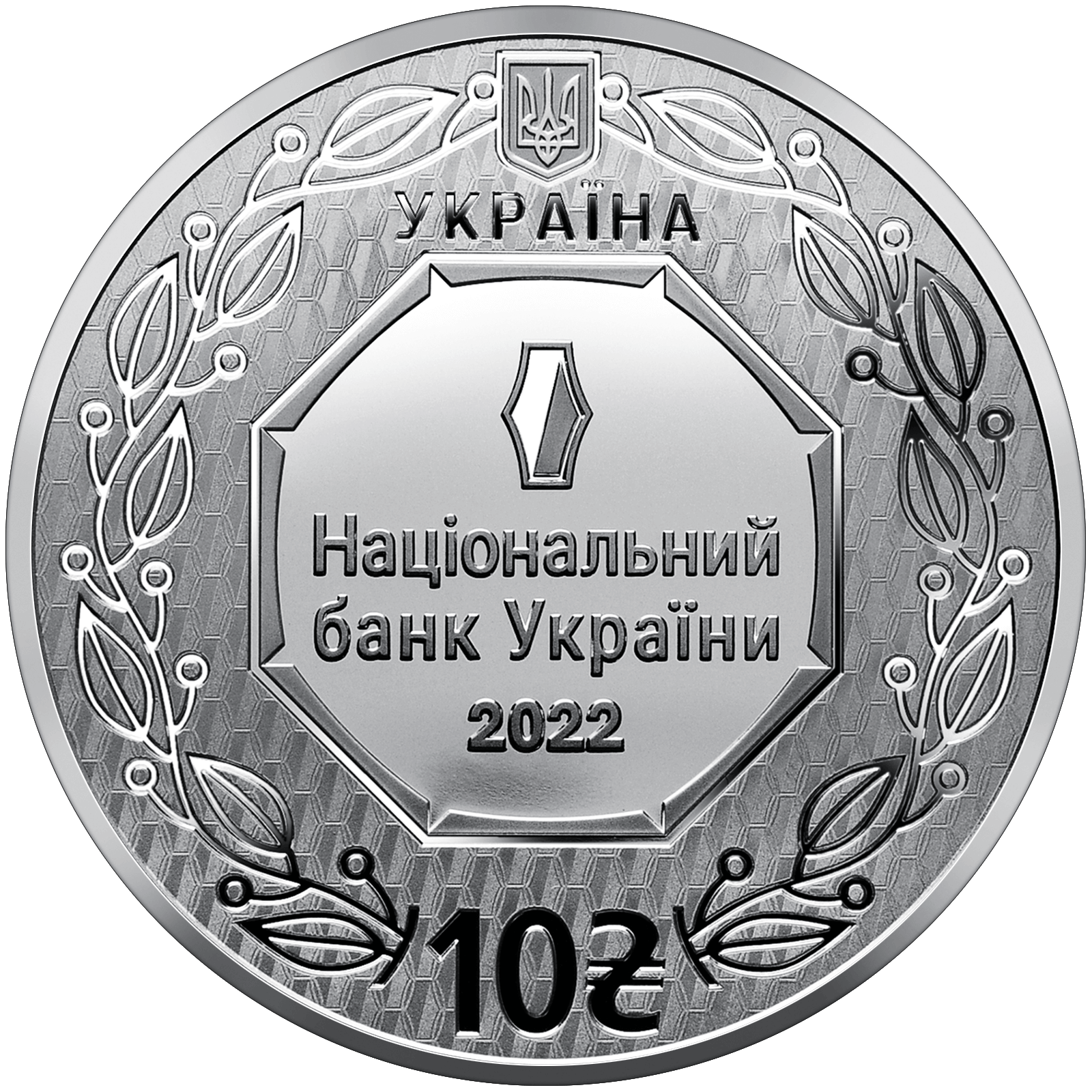 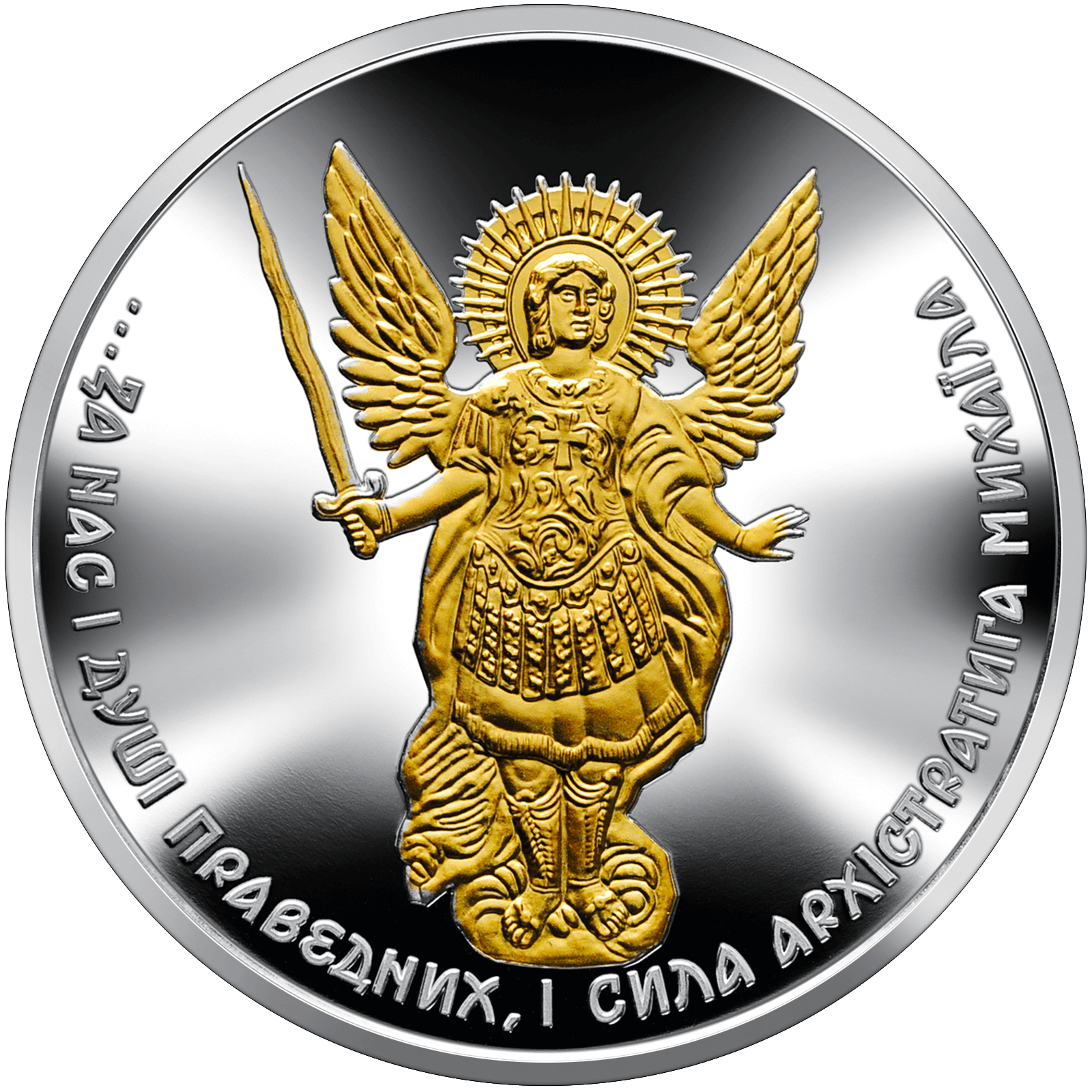 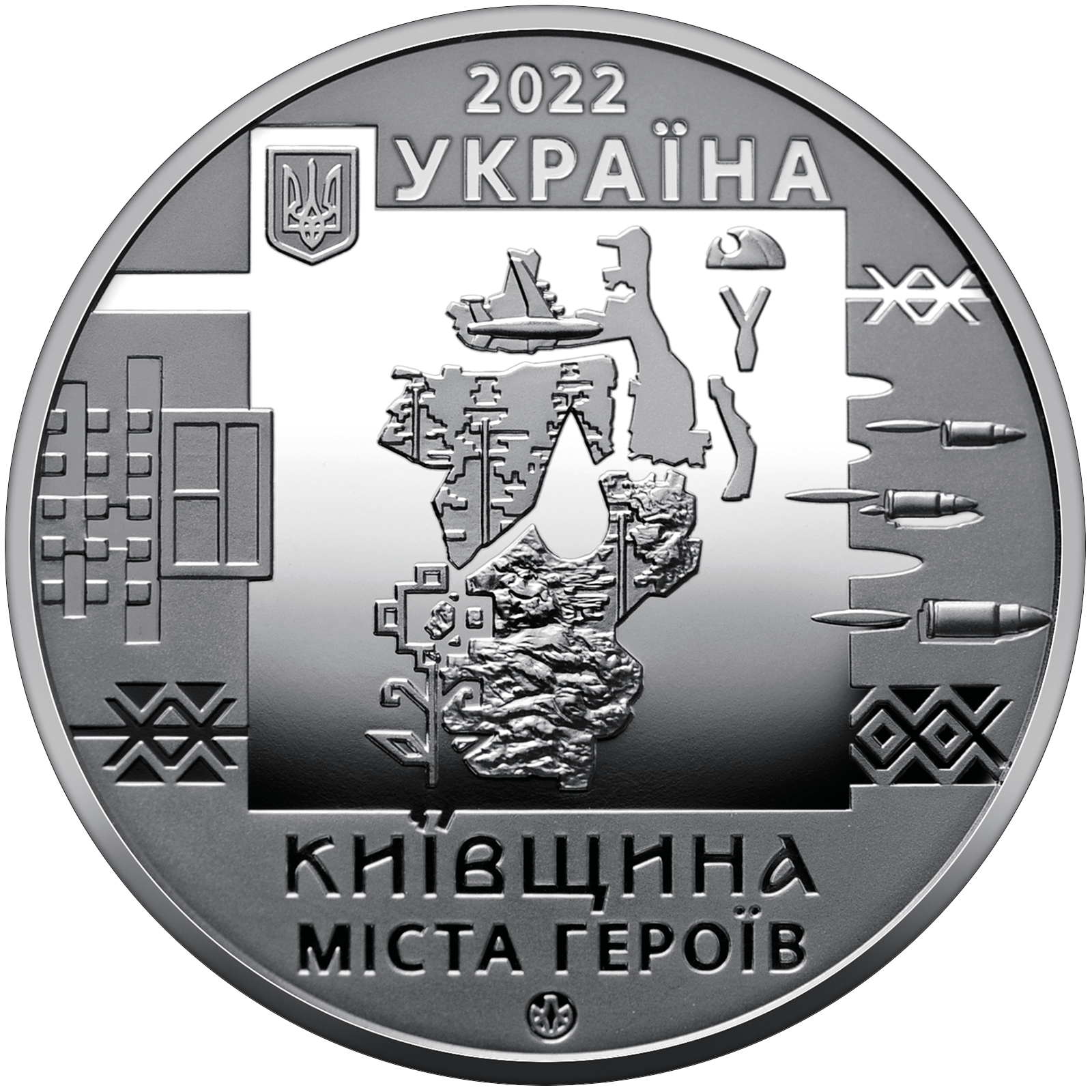 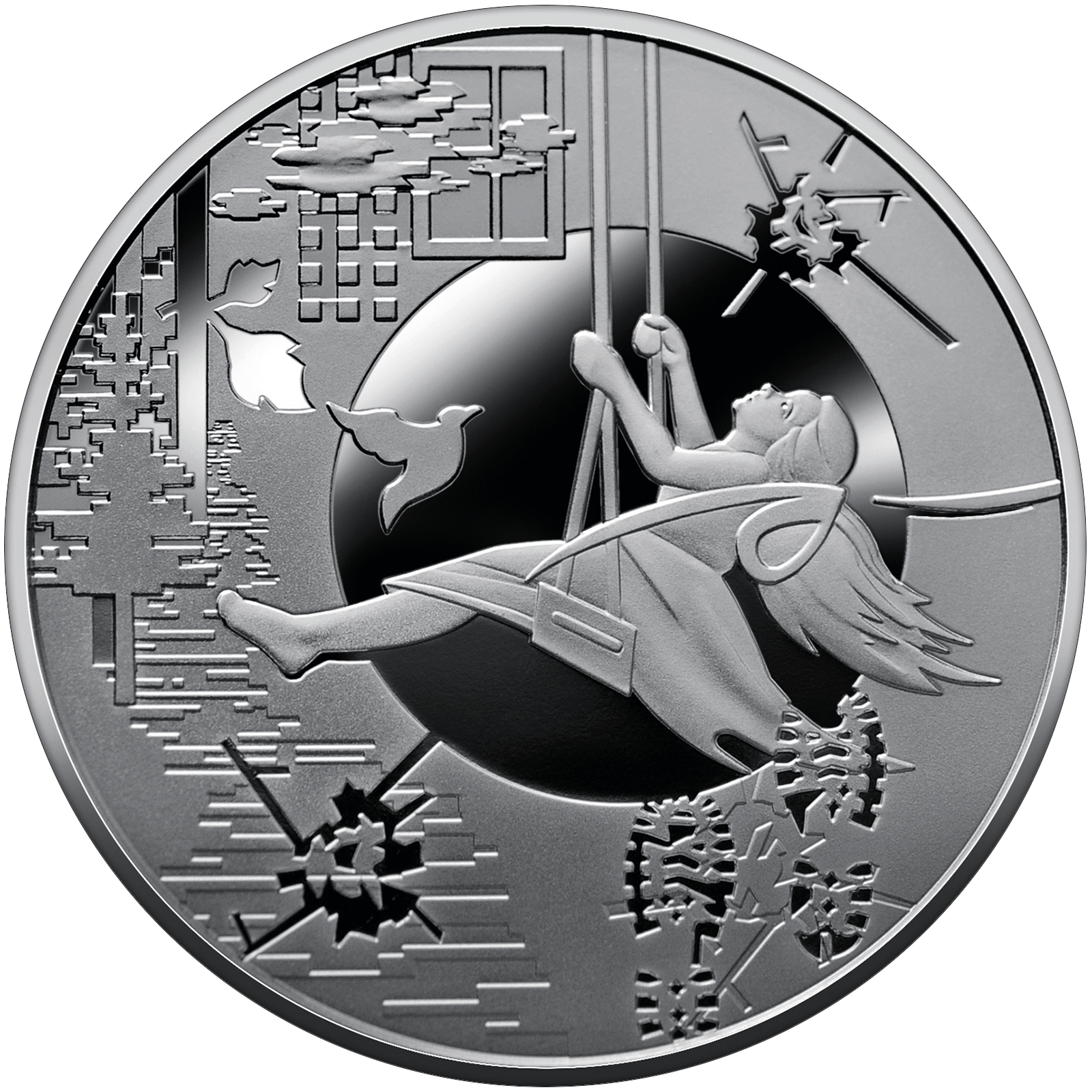 Kyiv Oblast. Cities of Heroes – Bucha, Hostomel, Irpin (commemorative medal)
Release date: 05.12.2022
Material: souvenir
Description:
This medal celebrates the fortitude, resilience and heroism of Ukrainians and honors the memory of the dead. After the russian invasion on 24 February 2022, fierce fighting broke out in Irpin, Hostomel, Bucha, and other towns and villages in the suburbs of Kyiv. With a view to encircling Kyiv, columns of armored vehicles and airborne troops of the russian army captured populated areas near the capital. There they destroyed a lot of housing and infrastructure and committed mass war crimes against the civilian population: looting, physical violence, and the kidnapping and killing of people, including children. On 2 April 2022, Kyiv oblast was liberated from the russian invaders thanks to the joint efforts, professionalism and heroism of all defense forces, and help provided by local residents. The liberation revealed the terrible truth about the horrific mass killings of civilians and the atrocities committed by the occupiers. These crimes shocked the global community so much that it launched an investigation of the war crimes and crimes against humanity caused by russia’s aggression against Ukraine.
Obverse: above is Ukraine’s small coat of arms, to the right of which is the legend 2022/УКРАЇНА (2022/Ukraine); in the center, against a smooth background, is a stylized composition depicting maps of Kyiv oblast cities: Hostomel, Bucha and Irpin; together, the maps resemble a heart; above, to the right of the composition, is an enemy paratrooper with a perforated parachute; above the composition is the legendary Mriia plane; in the center, against a smooth backdrop, is a tear; beneath, to the left, is a stylized flower that symbolizes the revival of life. To the left of the central composition are stylized house windows; to the right are flying bullets; beneath are the legend КИЇВЩИНА/МІСТА ГЕРОЇВ (Kyiv Oblast/Cities of Heroes) and the mint mark of the NBU’s Banknote Printing and Minting Works. The composition is complemented with images symbolizing wounds caused by the physical and moral suffering inflicted on Ukrainians by the occupiers: a wound against a smooth background (to the left, above the windows), a stitched wound (to the right, above the bullets), and a wound stitched with a national embroidery element (to the left, below the windows); beneath, to the right is a national embroidery element symbolizing the healing of wounds and revival).
Reverse: against a smooth backdrop is a girl on a swing; the girl’s hair ribbon breaks as she swings, symbolizing a premature death; beneath, to the right are footprints made with the dirty boots of the enemy who intruded on the peaceful lives of Ukrainians; to the left, next to the girl is a bird that symbolizes the continuity of life; above is a stylized city; to the left is a forest; beneath is a river of life that has been ripped through with bullets.
Painter: Maryna Kuts
Sculptor: Anatolii Demianenko and Volodymyr Demianenko. Computer-aided design by Yurii Lukianov.
Coins in circulation (actual/planned): 100000/100000
Diameter, mm.: 35
Quality: special uncirculated
Coin edges: smooth
Souvenir products
Eastener calendar 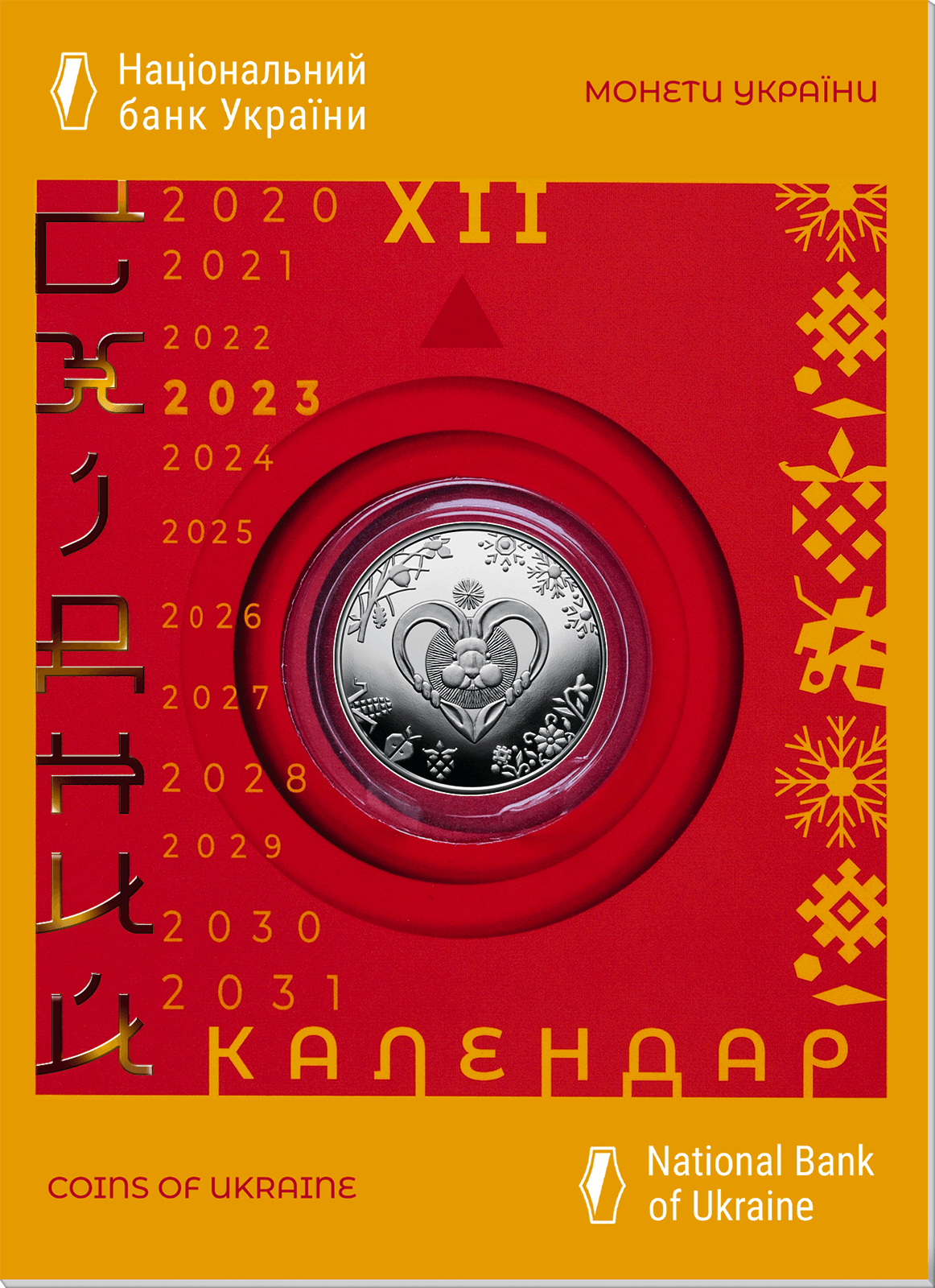 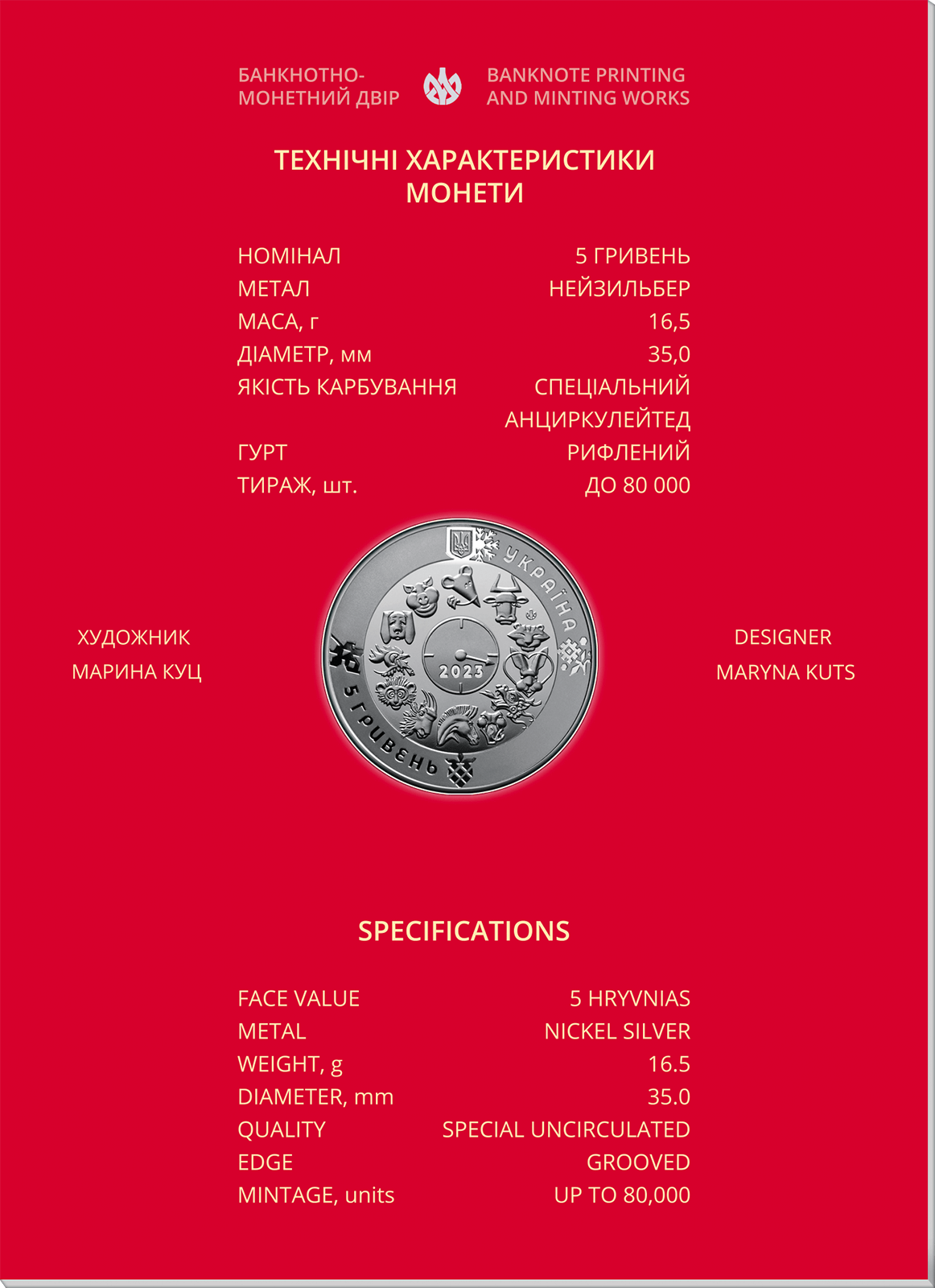 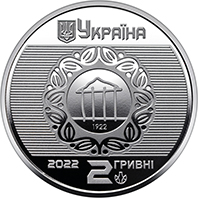 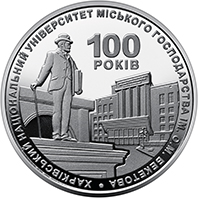 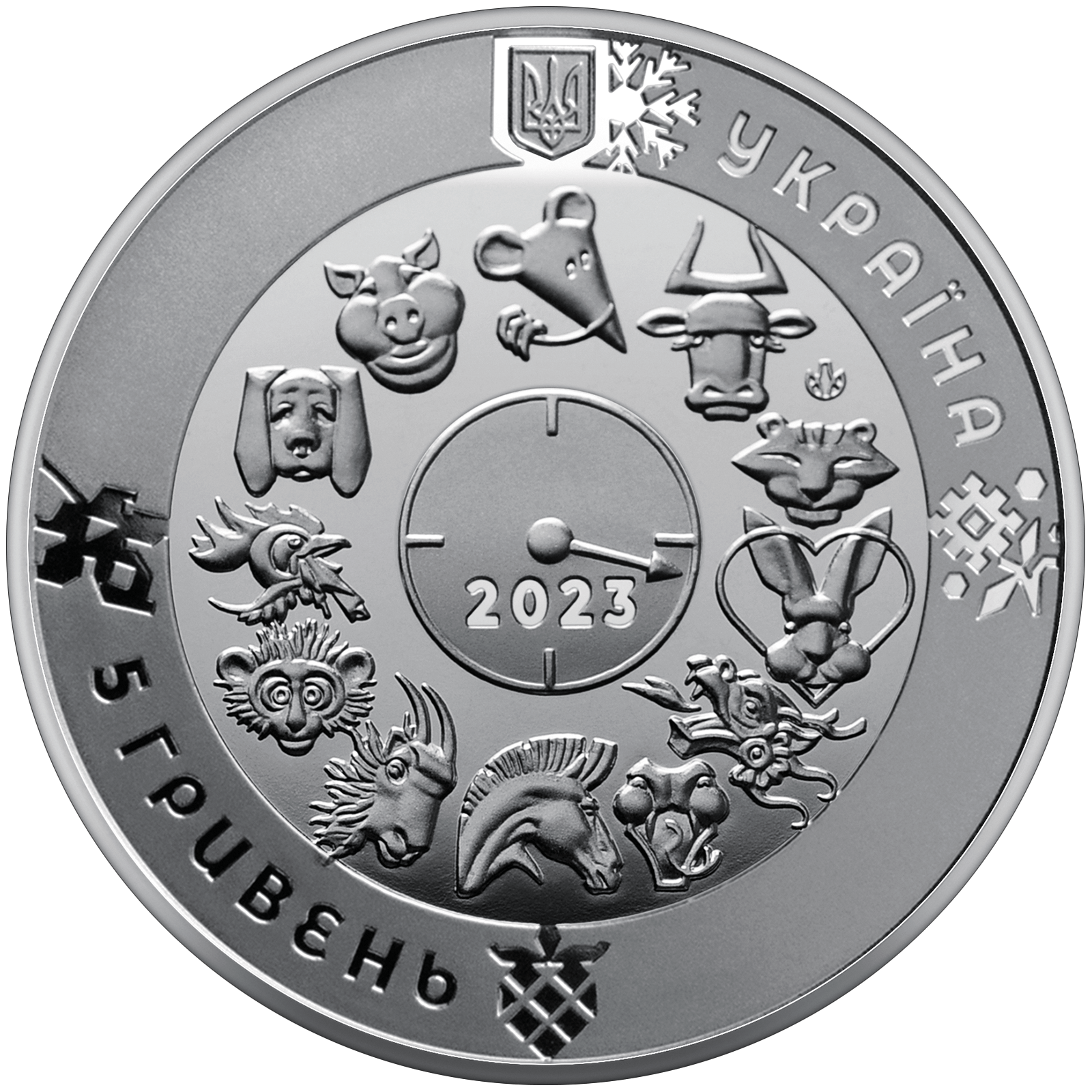 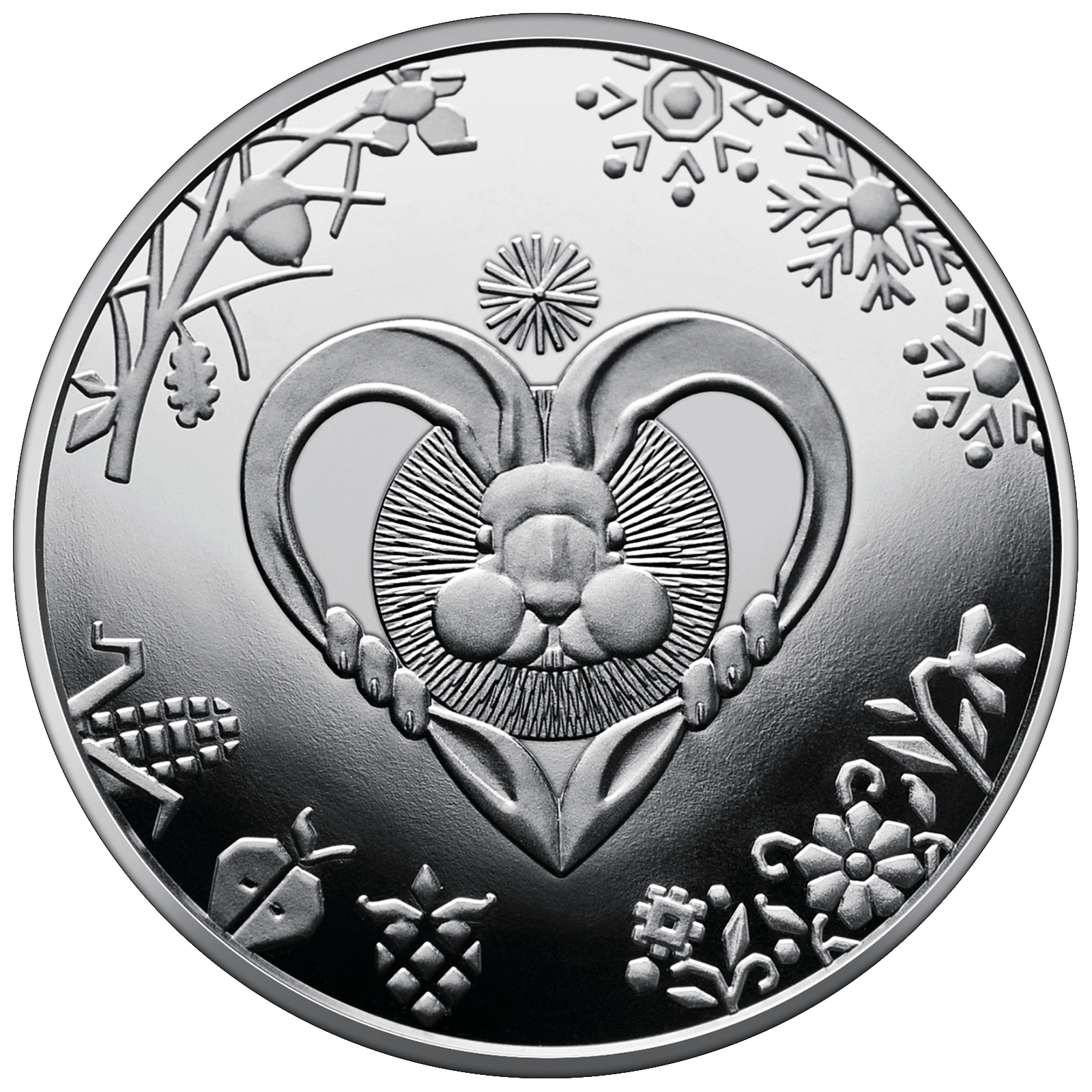