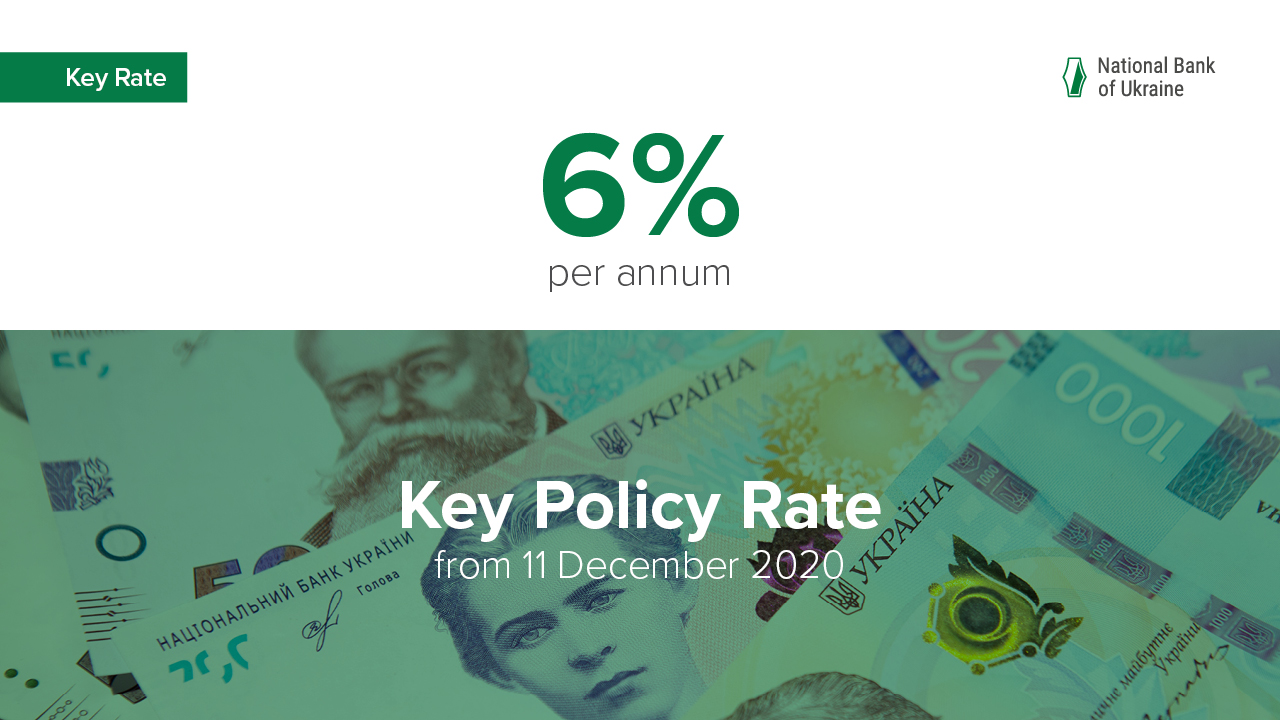 The Board of the National Bank of Ukraine has decided to keep its key policy rate at 6% per annum. On the one hand, this decision does not change the expansionary stance of monetary policy, which is important for economic recovery. On the other hand, it will keep inflation moderate.

In November, consumer prices grew by 3.8% yoy. In monthly terms, the consumer price index also grew noticeably, by 1.3%, which was more than the NBU had expected.  An important factor behind the growth in consumer prices was the increase in natural gas prices on the European market, which impacted domestic prices of gas, heating, and hot water supply. In addition, some foods became more expensive because of lower harvests and the resulting growth in global prices.

Buoyant consumer demand has also supported price growth in the past few months. Higher incomes and worsened expectations, including due to uncertainty over the lockdown, encouraged households to spend more, which was evidenced by an increase in retail turnover. This also contributed to an active economic recovery in H2. The NBU sees the impact of the “weekend quarantine” as insignificant, although it has affected the confidence of businesses and consumers.

In view of the low comparison base, consumer prices are expected to continue rising in the coming months.

According to the NBU estimates, the quarantine restrictions announced by the government for January 2021 will not have much influence on economic activity, consumer demand, and thus on inflation. At the same time, balanced monetary and fiscal policies will not only contribute to the resumption of economic growth, but also will maintain inflation at moderate levels.

Cooperation with the IMF remains fundamental for the recovery of Ukraine’s economy. Financing provided by the IMF and other international partners is crucial for the planned budgetary spending. Without this support, the fiscal impulse required to revive the economy will be much smaller, and the recovery will take longer.

Ukraine’s fulfillment of its obligations under agreements with international lenders will unblock next tranches of official financing. This will reduce interest rates on state borrowing on the domestic and foreign markets.

As before, a rise in coronavirus cases and the imposition of stricter quarantine measures to overcome the pandemic remain the key risks to macrofinancial stability

This could result in gloomier consumer sentiment and subdued domestic demand, which would depress economic activity and restrain inflation.

Other risks also remain significant. They include:

Given rising inflationary pressures and great uncertainty, the NBU Board decided to keep the key policy rate unchanged, at 6%.

Looking ahead, the NBU’s monetary policy will mainly depend on how the pandemic develops and how high inflation risks are

If the epidemiological situation stabilizes quickly, the economy will continue to revive, accompanied by a moderate increase in inflation. The main stimuli will be provided by fiscal policy, including by an expected rise in the minimum wage. That said, the NBU, while conducting a loose monetary policy, stands ready to raise its key policy rate in response to accelerating inflation on the back of a revival of the global and Ukrainian economies.

Conversely, the materialization of the adverse scenario will restrain consumer demand, slowing overall economic growth. Under such conditions, inflationary pressures will be weaker, enabling the NBU to give the economy additional monetary impetus for growth.

A summary of the discussion by Monetary Policy Committee members that preceded the approval of this decision will be published on 21 December 2020.

The next monetary policy meeting of the NBU Board will be held on 21 January 2021, according to the confirmed and published schedule.